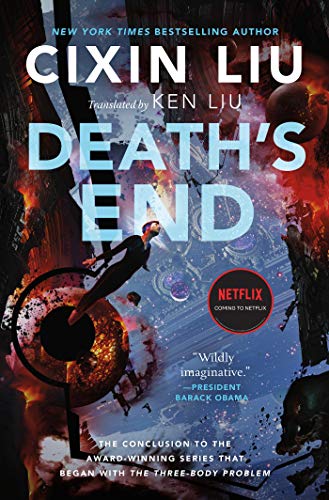 Soon to be a Netflix Original Series!“The War of the Worlds for the 21st century… packed with a sense of wonder.” – Wall Street JournalThe New York Times bestselling conclusion to a tour de force near-future adventure trilogy from China’s bestselling and beloved science fiction writer.With The Three-Body Problem, English-speaking readers got their first chance to read China’s most beloved science fiction author, Cixin Liu. The Three-Body Problem was released to great acclaim including coverage in The New York Times and The Wall Street Journal and reading list picks by Barack Obama and Mark Zuckerberg. It was also won the Hugo and Nebula Awards, making it the first translated novel to win a major SF award.Now this epic trilogy concludes with Death’s End. Half a century after the Doomsday Battle, the uneasy balance of Dark Forest Deterrence keeps the Trisolaran invaders at bay. Earth enjoys unprecedented prosperity due to the infusion of Trisolaran knowledge. With human science advancing daily and the Trisolarans adopting Earth culture, it seems that the two civilizations will soon be able to co-exist peacefully as equals without the terrible threat of mutually assured annihilation. But the peace has also made humanity complacent.Cheng Xin, an aerospace engineer from the early twenty-first century, awakens from hibernation in this new age. She brings with her knowledge of a long-forgotten program dating from the beginning of the Trisolar Crisis, and her very presence may upset the delicate balance between two worlds. Will humanity reach for the stars or die in its cradle?The Three-Body Problem SeriesThe Three-Body ProblemThe Dark ForestDeath’s EndOther BooksBall Lightning Supernova EraTo Hold Up The Sky (forthcoming)At the Publisher’s request, this title is being sold without Digital Rights Management Software (DRM) applied.

⭐The first book in the series was an oddity, one that I loved for the fresh viewpoint, the historical nature, the madness of the characters that are the distilled essence of humanity, while remaining quite believable. I thought the rest of the series would continue in a similar vein, but how wrong I was. The scope of everything touched on just expanded and expanded.I found parts of the second and third books difficult to read. I had to force myself to read through them – the ideas and events were almost too much to consume. It was difficult to focus on the fact that this is all fiction. But there was still that doubt – what if this is really what the Universe holds? It is a scary thought. Perhaps with books like this, humanity might be better prepared for what might really be worst-case scenarios?This is why I have given this book four stars instead of five. I cannot say I love it. I love it and hate it. The ideas it encompasses, the situations and the – callousness? – of the universe and those that inhabit it were a struggle to have in my head. But it is worth it, to experience the universe anew, and expand the way I think about it – albeit in a (hopefully) fictional way.I must also give a special thank you to the translators and editors – they have done a magnificent job, I hardly knew it had been translated at all!Like climbing a mountain, it can be stressful and difficult at times, but the vista from the top can make it worth it.

⭐The 3 part Three body books take sci fi to whole new level. I never leave book reviews but felt obliged this time. There is a certain element of scientific and mathematical theory within the story, to be honest there are still elements I can’t quite get my head around and wish I understood better, this does not detract from the whole experience though. Actually this hard science adds to the overall feeling that you forget you are reading something from one man’s imagination and actually feel as if you are reading some sort of non fiction history.How the author was able to write this down and the translators get it across in English is nothing short of miraculous. I couldn’t put these books down and felt a real sense of loss when I finished.Absolutely fantastic and immersive reading experience.

⭐Slightly clunky narrative style (which might just reflect the translation) and a little slow to get going in the first book, but by the second book I couldn’t put this series down due to its fast pace, enormous scale, and the way it seemingly blended a logical science based (ie. consistent with physics as we presently understand it) description of actions, events and consequences, with wildly imaginative ideas. I’ve been reading Sci-Fi for a long time but haven’t read anything as original as this whilst remaining true to the basic precepts of proper old-school ‘Science Fiction’.I’ve no idea how Amazon Video is going to be able to turn these books into a watchable TV series, but I’ve little doubt that it will require the reported Billion dollars that Jeff Bezos is prepared to pay in order to even attempt to realise something as grand and as complex as this story on the small screen. I will certainly look forward to seeing the attempt, but in any event, if you like SF then do yourself a massive favour and read this series.

⭐So I reached the last book of this very challenging trilogy, and I must say it was very difficult going for me. While there was much to engage me in discrete sections, I literally felt pulled through the universe at light speed because there were just too many complex ideas and theories for me, the average reader, to grapple with.The good bits for me was the love story involving aerospace engineer Cheng Xin, who takes on the role of Swordholder, which followed on (I felt) less excitingly from that of the Wallfacer in the previous book, and average Joe, Yun Tianming, that literally stretched in unrequited fashion over eons, and even in disembodied form (you have to read it yourself; much too many details to labour over). However, even that storyline was checkered, and unsurprisingly so, because of all the eras spanning centuries or more that the reader has to travel through plus all the astrophysics to navigate.So it comes as a huge relief when I got totally drawn into the fantasy tales that Yun Tianming tells Cheng Xin as an allegory and possibly hidden message about the Trisolarians who may or may not be ready to live in peace with the human race. Those tales are nestled in the middle part of 600+ pages and were good enough reasons for me to power through and not give up, and see how they were significant to the main storyline.Another character that held an interest for me is a Lucy Liu-like character from “Kill Bill”, who is actually a Sophon, or a Trisolarian android acting as a kind of envoy and communications agent, who spectacularly splices with her samurai sword some pesky humans who just cannot wait their turn to get at the food supplies in the story arc about displaced populations herded like refugees in the Australian continent, which was a terrifying part of the novel. But she too similarly disappears and reappears another few eras later.The unifying character Cheng Xin and her faithful sidekick AA hibernates through many eras to finally reach another terrifying prospect of the entire solar system collapsing into two dimensions. That in itself was spectacularly dealt with but as they journeyed on to more desolation, it really felt too dark and bleak for me.A clever and intelligent book, but I felt buried under the deluge of ideas and information.

⭐It’s years since I’ve read anything as powerful as this trilogy.I’m not a sci-fi fan to the same extent as many of the reviewers here but this held my attention. It has caused me a few sleepless nights, partially because I couldn’t put it down but then, when I did, because my brain could not switch off and find sleep given the enormity of it all.It has certainly awakened an interest in Physics that my teachers at school failed to inspire in me. I now understand why the likes of Brian Cox get so excited about Physics and the universe, they can see something that most of us are blind to. Cixin Liu has opened my eyes, I’m still trying to come to terms with what I can now see.