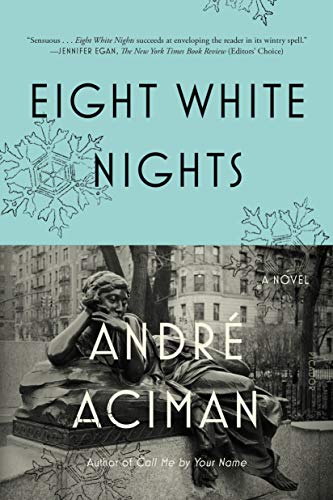 A LUSHLY ROMANTIC NOVEL FROM THE AUTHOR OF CALL ME BY YOUR NAMEA young man goes to a Christmas party in upper Manhattan where a woman introduces herself with three simple words: “I am Clara.” Over the following seven days, they meet every evening at the cinema. Overwhelmed yet cautious, he treads softly. The tension between them builds gradually―marked by ambivalence, hope, and distrust―culminating in a final scene on New Year’s Eve charged with magic and the passion. André Aciman yet again explores human emotion with uncompromising accuracy in this piercing new novel. Eight White Nights is a brilliant performance from a master prose stylist.

⭐At the time of this review, I would rate this novel as the best book I have read in 2010. First, let me just say that I am a huge Andre Aciman fan and am pre-disposed to like anything he writes! That being said I really must say that this book is a masterwork of prose. I have read some of the online reviews posted here and it seems that the main objection they raise is that “nothing happens” or that there is “no action” in this novel. I take issue with these reviews because I think a tremendous amount does “happen” and that there is alot of “action” in this novel…it just takes place internaly. Indeed, there is not even that much dialogue written but when you can write as well as Mr. Aciman does, dialogue seems superfluous. I found myself underlining and highlighting various sentences and passages (something I never do in works of fiction) so as to return to them often. Here I am thinking of page 62…see Clara’s explanation of people she has met and lightness and darkness…amazing writing. The main character “the man” or “the narrator” is not given a name throughout the entire novel. This was a stroke of brilliance on the author’s part…this character is ME and maybe even YOU…he does not need an identity…that would only act as an impediment to understanding him better. What is interesting is the small amount of “page time” his mother and father are given considering their importance. “the man” is a product of those people (and who amongst us isn’t?) and all that he does when he meets Clara, all of his discomfort, insecurity etc. stem from them…and again, who amongst us can say otherwise? But, while he (and us) are a product of his past…the novel progresses to an ending “rich” with possibility, and it all hinges on a “chance” meeting, at a party that he didn’t even want to go to. To me, the theme of possibilities, that nothing is “set in stone” and that even someone who is 28 can evolve and be open to chance is incredibly encouraging…happy ending? You decide!!! I must also take a moment to say a few words about the “bonus” gifts Mr. Aciman’s books give me. When other writers use outside references, say…art, literature or music to give us a “feel” for the character I tend to read over them even if I am not familiar with those references cited. However…for some reason…Mr. Acimans books make me want to read the books he references and especially, listen to the music refrenced. Trust me, listen to the Bach Sonata transcribed by Siloti and that passage in the book will resonate even more!!! Listen to the Beethoven and you will understand the importance of the gift “the man” gives Clara. By no means is this listening a requisite…but trust me…you will want to!

⭐Boy meets girl on p.1, and after p.360 you close the book and think “wtf happened here?”The answer is, nothing very much. They try, sometimes quite hard, to launch a relationship but they’re thwarted time and again by their own intellectual analysis of the possibilities, like chess players mentally paralyzed because every possible move leads to some knowable disaster six moves ahead.So instead, they see all of Eric Rohmer’s films — during which they eat and drink so much that you imagine them bloated by the end — and take one car trip together. They demonstrate their polyglot talents to each other by inventing their own language, which is mainly used to maintain smugness and baffle their other friends. It certainly does not draw them closer together. Most of the action takes place on the outskirts of the campus of Columbia University at Christmas time, but the district is not portrayed in any kind of way to make you wish you knew the place better. There are snowy streets. There is a park. There is a patrolman. There are buses. An occasional taxi.The couple never get into bed, although I suppose an optimistic reader is allowed to hope that this blessed event is imminent as the book ends. A more realistic reader will assume that they’ll simply move on from Rohmer to Resnais or Rivette and keep munching. He gets a hard-on somewhere around p.200 and she possibly feels it against her, or possibly not. Nothing is done with it.Pity.

⭐A superbly written, psychologically sophisticated book that reports one man’s thought progression as he encounters and pursues a captivating woman. Aciman unfolds the ebb and flow of the narrator’s engagement with this woman with incredible skill. It’s a cliffhanger romantic novel without being sentimental or sensational because the narrator speaks with the depth of insight and honesty that is extraordinary in this age of opportunistic hook-ups and utilitarian attachments. It will broaden the way people think about themselves when pursuing that special person. His hero’s internal conversations remind me of the best non-fiction writing about human attachment, belonging, internal security and trust, but without sounding like behavioral science writing. For anyone who’s traveled the bumpy road from unsettling attraction to being part of a satisfying connection, this writing will reassure us that the work of becoming involved with another can be worth the effort.

⭐Yes, this book has too many words 🙂 The author is in love with writing. Those sentences are long. The main character overthinks everything. Are there even people like that? But, it’s good reading for the winter holidays, I guess…

⭐What a book! Such joy, such stress, such pain! So much life in just a week!I’ve never read such poetic prose in my life. Each sentence is a treasure.I love the narrator. I love how he voices thoughts I didn’t even know I had. I love that he is insecure and confident, shy and bold, light-hearted and deep, confused and certain. He’s me. He’s all of us.I want to re-read this book again and again, highlighting every sentence that moves me, but I’m afraid I’ll have to highlight the whole thing.Highly recommend.

⭐I was not really impressed. I had high hopes for this book after reading another story from the same author however I felt really bored reading this. I only finished it because I had a goal of finishing it to start another book.

⭐I did not get past the protagonists first conversation. Beautifully written but oh so boring and drawn out!Will look forward to his latest book as I am sure that it will be better, as were his previous books

⭐A book that takes some reading. The pace is slow and you constantly hope something will actually happen. The charactersare a bit weird and it is not really a love story. Good descriptions of New York and the Hudson river in the grips of winterand the atmosphere of Christmas. Maybe not appeal to the English mindset

⭐I adore anything that Aciman writes. This is my least favourite but, still excellent.

Call Me By Your Name by Andre Aciman (PDF)