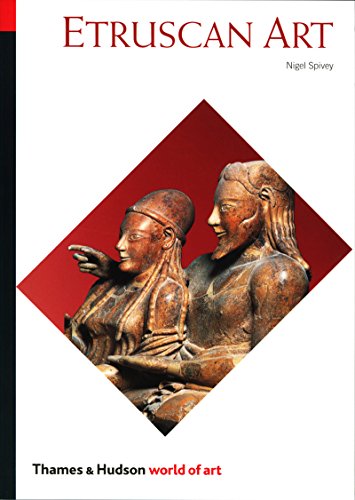 Recent discoveries and new scholarship bring the Etruscan world vividly to life. The Etruscans were the most powerful force in central Italy until Roman unification of the peninsula. Vestiges of their art, architecture, and unique language have long intrigued scholars, and the search for this mysterious civilization continues to fire the imagination. Despite a history of pillage, rich archaeological evidence survives: thousands of tombs, many of them frescoed and filled with vases, sculpture, jewelry, and metalwork; and the mysterious Etruscan sites that are places of tourist pilgrimage, such as Cerveteri, Vulci, and Tarquinia. In this new book, the first survey of its kind in more than twenty years, Nigel Spivey brings the Etruscan world to life, illuminating the social, political, and cultural context of the art objects and artifacts that remain the singular achievement of the Etruscans. 186 illustrations, 37 in color

Editorial Reviews: About the Author Nigel Jonathan Spivey is Lecturer in Classics at the University of Cambridge. His many publications include Etruscan Art, Enduring Creation and the prize-winning Understanding Greek Sculpture.

⭐In spite of it’s modest dimensions and only 216 pages, this book gives a rather exhaustive account of Etruscan art.It goes from well known art like the bronze Chimaera from Arezzo to a multitude of votive human terracotta heads (meant as offerings or gifts in temples). Discussing Etruscan art deals with mainly two problems. There are for example a number of wall paintings and decorated vases showing athletes performing their discipline. Since there survived several kinds of lists but no literature at all, we don’t know if the Etruscans knew events like for instance the games of Olympia in Greece. There is nothing or very little known about their sociological structure. Moreover there are no archaeological sites with a stadium (or at least the foundations of it). Therefore, those wall paintings of athletes could also be regarded as imagination of the artist.Another problem is the originality of Etruscan art. Many say that they were only capable of imitating Greek and Eastern examples. Nigel Spivey proves that the Etruscans had a high level of original art in spite of those cosmopolitan influences. Strongly recommended

⭐This book was assigned in a class, but it’s not at all text-bookish. Terrific illustrations and witty text make it an excellent intro to Etruscan art and life.

⭐Spivey’s Etruscan Art has been out for a while, but it is still a classic. Well written in non-technical language with excellent photographs. This is an good survey of the Etruscan art pieces that have survived from 1000 BCE to 200 BCE. Definitely a best buy.

⭐Exactly what I was looking for to help finding Etruscan sites for my next trip to Italy! Grazie signore Spivey.

⭐Strong beginning, than the author gets lost in the woods.

⭐The format of this survey of Etruscan art is typical of Thames and Hudson’s (publishers) “World of Art” series: concise (200pp.), inexpensive, unevenly illustrated (186 photos, but only 37 in color). Author Nigel Spivey arranges his material in chronological order, from Villanovan Etruria (Early Iron Age, 1000 – 750 BC) through successive waves of Greek influence and Roman conquest, ending around 90 BC when the Etruscan cities had become thoroughly Roman in outlook and culture. A final chapter provides brief but interesting glimpses into historical responses to the Etruscan legacy, from Cosimo di Medici to D. H. Lawrence and the modern (and ancient) Italians.The book is up-to-date (as of 1997) and interestingly written in a sometimes-aphoristic style, with a useful bibliography. As I closed the final page, I was left wanting more (and missing some old favorites, such as the Capitoline Wolf, that did not make it into the book). However, considering its inexpensive price and overall quality, it can certainly be recommended to readers who would like an introduction and overview of Etruscan art.

⭐This book is a fine introduction to its subject. Spivey has an easy acquaintance with research on the Etruscans up to the publication date of 1997; and he conveys the results of this research in an entertaining but judicious manner. This is a major strength for a book like this: after all, given that the Etruscan language is only partially understood, many people over many years have been tempted to let their speculations run riot when they write about Etruscan art and culture. Spivey discusses the probable significance of Etruscan tomb imagery, with its emphasis on sports, feasts and incidents from Greek mythology; he also provides guidance to the symbolism of many of the paintings and statues. But he is careful not to wander too far from the evidence.The Thames and Hudson World of Art series offers art books at a remarkably low price. That’s good news. But of course it also means that the quality of the reproductions is not that high: only 37 out of the 223 illustrations are in colour; and even the colour photos do not have sharp definition. Such reproduction issues are a major problem in a book on Etruscan art because many of these paintings are already faded or damaged, as is inevitable after 2,000+ years. I found that illustrations of some of the more damaged pieces were almost useless. Readers are advised to check on Google Images while reading Spivey: many Etruscan paintings can be seen there in far better reproductions than the ones you’ll find in his book.

⭐A really useful book for anyone planning to visit the sites or just wanting to know more about these rather elusive people.