For the Glory of God: How Monotheism Led to Reformations, Science, Witch-Hunts, and the End of Slavery by Rodney Stark (PDF) 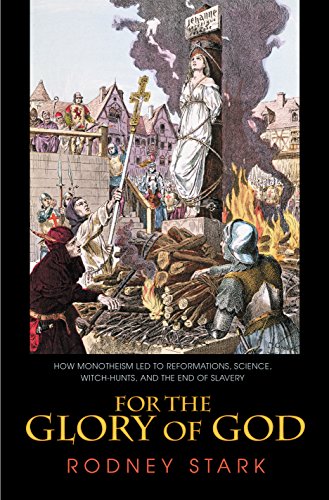 Rodney Stark’s provocative new book argues that, whether we like it or not, people acting for the glory of God have formed our modern culture. Continuing his project of identifying the widespread consequences of monotheism, Stark shows that the Christian conception of God resulted–almost inevitably and for the same reasons–in the Protestant Reformation, the rise of modern science, the European witch-hunts, and the Western abolition of slavery. In the process, he explains why Christian and Islamic images of God yielded such different cultural results, leading Christians but not Muslims to foster science, burn “witches,” and denounce slavery. With his usual clarity and skepticism toward the received wisdom, Stark finds the origins of these disparate phenomena within monotheistic religious organizations. Endemic in such organizations are pressures to maintain religious intensity, which lead to intense conflicts and schisms that have far-reaching social results. Along the way, Stark debunks many commonly accepted ideas. He interprets the sixteenth-century flowering of science not as a sudden revolution that burst religious barriers, but as the normal, gradual, and direct outgrowth of medieval theology. He also shows that the very ideas about God that sustained the rise of science led also to intense witch-hunting by otherwise clear-headed Europeans, including some celebrated scientists. This conception of God likewise yielded the Christian denunciation of slavery as an abomination–and some of the fiercest witch-hunters were devoted participants in successful abolitionist movements on both sides of the Atlantic. For the Glory of God is an engrossing narrative that accounts for the very different histories of the Christian and Muslim worlds. It fundamentally changes our understanding of religion’s role in history and the forces behind much of what we point to as secular progress.

⭐Rodney Stark is a very thorough investigator and engaging author. Rather than just repeat the exaggerated, repetitious claims of those who are PC and enforcing stereotypes on history, Rodney actually does research, looking for data which characterizes events or periods which are caricatured by popular accounts. This particular book deals with the rise of monotheism and it’s different streams of thought and organization in the west; the unique rise of science and technology in this Western intellectual climate; exploration of witchcraft and similar trials across Europe (There were only 347 witchcraft trials (and ~900 defendants) from 1300-1499 and men were more likely than women to be executed; from 1540-1700 in Spanish Inquisition there were 44,701 cases from all offenses with a total of 826 executions); and the rise of anti-slavery attitudes in Christianity, unique among the major religions of the world, and the corresponding laws agains slavery, unique among many societies and nations in the world, even today;His style of writing is one I really enjoy. He has a good overview of direction he is going at major launching points in the text; he addresses the assumptions, data limitations, and logic behind his conclusions; he shows data summaries and anecdotal pictures or artwork from the periods in questions; he illustrates the exaggerations that are commonly taught as fact by accurate quotations; and he carefully defends what he believes to be the correct interpretation of the data. His writing is thus carefully phrased, without be academically dry and suited only for technologists working in the field.I would highly recommend this book as well as his others.

⭐This is an incredible read. This is one of the most thorough analyses on any particular subject out there, and Stark has meticulously left no stone unturned in explaining the role Christianity has had in shaping civilization. Though many think of Christianity’s influence on Western society as being merely tangential, and in some cases an obstacle (as I used to think), Stark’s thesis is that monotheism in general and Christianity in particular has been the primary force responsible for the emergence of science and the demise of slavery.And with some reflection Stark’s thesis makes sense. If religion shapes how one views his relationship to the supernatural, then, not surprisingly, that belief system will have a profound influence on every choice that person will make. If true, as Stark points out, different religious belief systems will produce different cultural, economic, political and technological results. Stark does a great job of explaining how polytheistic faiths reach different conclusions about moral issues versus monotheistic ones. Where Stark falls short is that the bulk of his book is about Christianity and he doesn’t specifically explain why Christianity, with its unique emphasis on Jesus, produced different results from the other two major monotheistic faiths: Judaism and Islam.The book has four main sections, each dealing with subjects in the subtitle. The least interesting, yet informative, is on Reformations. The most riveting is the section on Science. Stark boldly asserts that Christian theologians were the first in world history to conduct authentic science and were doing it long before they came across Greek philosophy. He points out, though early Christians found Aristotelian logic useful in developing a sound philosophical foundation for their theology, they found Aristotelian physics useless.What’s most impressive about this work is that Stark refuses to reach deductive conclusions based on broad sweeping assumptions. He backs his theories with a penetrating and nuanced analysis of the historical record along with a healthy use of statistics and regression analysis. An annoying quality of the book, however, is that Stark appears to be on a myth bashing mission. It’s clear Stark has an axe to grind with `Enlightenment’ thinkers and Marxist historians who he accuses of either distorting history or carelessly force fitting their theories. It isn’t so much that he’s wrong but he discusses ongoing debates between scholars, mentioning names and works, that laypersons are generally unfamiliar with.Overall this is a great work and it’s highly recommended for anyone who’s interested in learning about Western Civilization and the influence Christianity has had in shaping our modern society.

⭐Rodney Stark has written a book that every history and sociology student should read. It’s also a great resource for Christians wishing to research the triumphs and some of the mistakes that have been carried out in God’s name. I would also recommend it to aficionados of Religion like Dan Brown fans and people who love a conspiracy!The book deals with three topics over which there is much controversy and confusion. With tons of research and great sensitivity Stark separates truth from error and presents his own reasoned arguments. The careful reader is left with a much clearer picture of why the God of Christianity in particular has been such catalyst for change and shaped history so dramatically.The book is easy to read, although it contains some dense documentary in places, and is very rewarding. It is an excellent addition to any thoughtful person’s library.

⭐interesting view of how Christianity has shaped the development of science

⭐I enjoyed this book so much. It is clear, enlighting and enriching for someone who is not a scholar but has a great interest in this kind of issues. I will surely be reading more by this author soon.

Reformation Myths: Five Centuries Of Misconceptions And (Some) Misfortunes by Rodney Stark (PDF)

Cities of God: The Real Story of How Christianity Became an Urban Movement and Conquered Rome by Rodney Stark (PDF)

God’s Battalions: The Case for the Crusades by Rodney Stark (PDF)

Acts of Faith: Explaining the Human Side of Religion 1st Edition by Rodney Stark (PDF)