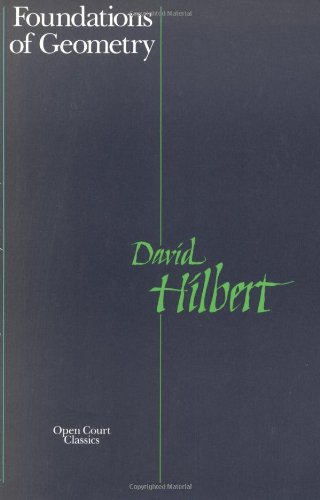 Along with the writings of Hilbert’s friend and correspondent Frege, Hilbert’s Foundations of Geometry set the stage for Russell and Whitehead’s Principia Mathematica. Hilbert presents a new axiomatization of geometry to algebra, and introduces the distinction between mathematics and metamathematics, with a new theory of proof.

⭐David Hilbert’s “Grundlagen der Geometrie” is a work of great significance for anyone interested in mathematical foundationalism, the history of geometry, and intellectual history and philosophy in general. Sadly, however, the translation of this edition is extremely poor — not simply akward, or rough, but careless to the point of making the text unreadable. If I did not have access to the German original, I would have long ago given up on making sense of the translation. In Theorem 7, for example, it speaks of “points which are not on the plane alpha.” The German is extremely ambiguous, but mathematically it only makes sense if you interpret the sentence as referring to the “line a.” On page 31, the translator commits the unpardonable error of mistaking “nun” (now) for “nur” (only). At the end of theorem 34, and entire equation was left out, and the meaning of the sentence completely bungled. Most extraordinary is Theorem 35, where what should be translated as “It follows from Theorem 22 that the sum of two angles of a triangle is less than two right angles” becomes “the sum of the angles of a triangle is less than two right triangles.” In the very next sentence, “mithin” is interpreted as “hence,” implying a direct logical entailment where there is none. It should have been rendered simply as “of course.” Finally, in the next paragraph, it reads “where epsilon denotes any angles.” The German has “irgendeinen Winkel” — unambiguously singular.Given the tremendous importance of Hilbert’s Foundations, it is quite sad that there is not a quality translation available.

⭐Google books have this book available for free. But that apart, this book has and uses an imaginative language that only a master mathematician like Hilbert could come across to a reader. It shows that when you know the subject like the lines on your palm, then you describe those lines and planes clearly. They don’t make the likes of Hilbert anymore. He was one of kind in 10 generations. He produced three female doctorates in Topology alone in the early 1920’s. At a time when women were kept ot of universities. Easily considered the most prolific and influential, not to mention quite possibly the best Mathematician (He contributed to every field in Math and foundations of Physics as well) of the 20th century. No wonder even Einstein ran scared of him when Hilbert managed to produce in a few months a full and nearly complete theory of General Relativity which took Einstein a full decade! Einstein, of course, made the grave mistake of lecturing at Hilbert’s institute at Goettingen on the difficulties he was encountering with Gravitation which Hilbert took upon as a challenge and gave poor Albert sleepless nights to almost finishing up GTR before him. Nowadays, it is known as the Einstein-Hilbert ActionAll that was possible because no one knew Geometry like David Hilbert. Riemannian or Euclidean, he was the master of it all. It was Hilbert’s challenge in the Principles of Mathematical Logic of taking a logical statement to produce a boolean response that drove Alan Turing to develop his Turing machine! If the first paragraph in this book does not turn you on, then the rest of the book won’t.Hilbert was Riemann’s heir and the mathematical messenger from God and the subjects’ prophet just as Einstein was one for Physics.

⭐Hilbert gives his new system of axioms and studies their consistency, independence and necessity. Consider for example the theorem that the angle sum in any triangle cannot be greater than two right angles. We can prove it as follows. Consider a triangle ABC with the angles labelled so that ABC<=ACB. Let D be the midpoint of BC. Draw AD and extend it to E so that AD=DE. By SAS, ACD=BDE, so that angle CAD=angle BAE and angle DBE=angle ACB. Thus ABC has the same angle sum as ABE. ABC<=ACB means that AC=BE<=AB, so angle BAE<=angle AEB, so angle BAE<=angle BAC/2. In other words: for any angle A in any triangle we can construct a new triangle with equal angle sum that has as one of its angles A/2. By repeating this process we can make the angle A as small as we like. Thus, if the angle sum of some triangle was greater than two right angles, and we applied this procedure, we would get a new triangle where two of the angles are greater than two right angles, which is impossible. The "as small as we like" part gives away the fact that we are relying on Archimedes' axiom, which is necessary. "The investigation of this matter which [Max] Dehn has undertaken at my urging led to a complete clarification of this problem. ... If Archimedes' axiom is dropped then from the assumption of infinitely many parallels through a point it does not follow that the sum of the angles in a triangle is less than two right angles. Moreover, there exists a geometry (the non-Legendrian geometry) in which it is possible to draw through a point infinitely many parallels to a line and in which nevertheless the theorems of Riemannian (elliptic) geometry hold. On the other hand there exists a geometry (the semi-Euclidean geometry) in which there exists infinitely many parallels to line through a point and in which the theorems of Euclidean geometry still hold. From the assumption that there exist no parallels it always follows that the sum of the angles in a triangle is greater than two right angles." Another interesting topic is the connection between laws of algebra and the theorems of Pappus (which Hilbert calls Pascal's) and Desargues. Geometrically, we can multiply two numbers a and b using only the axioms of projective geometry as follows. We choose a line to be the "x-axis" and call one of its points the origin O and another of its points the unit 1. Mark Oa and Ob on this line. Draw another line, the "y-axis", through O. Pick some point i on the y-axis. Connect 1 and i, and draw the parallel to this line through b, meeting the y-axis at b' (as usual, "parallel to l" means: meets l at an arbitrarily designated line called the line at infinity). Connect a and 1 and draw the parallel to this line through b'. In Euclidean geometry this line cuts the x-axis at ab. In general, then, we may define multiplication in this way. The algebraic identity ab=ba now becomes a geometric theorem. This is the beautiful part: ab=ba is not just any old geometric theorem, it is in fact equivalent to Pappus's theorem: the construction of ab consisted of the line connecting 1 and i and three more lines, the construction of ba consists of the line connecting 1 and i and three more lines, each of which is parallel to one of the lines from the ab construction. Therefore, deleting the line connecting 1 and i, Pappus applies and says ab=ba. Similarly, Desargues is equivalent to a(bc)=(ab)c. ⭐This historic book is available for free from Project Gutenberg [...] Search for Geometry. This book is one of a few books available. This is the complete Open Court text. It is available both as a pdf file and a TeX file. ⭐I received an illegal copy of this book. The seller charged high & yet he shipped a printed copy of an ebook from Project Guttenberg books. Please see the attached snapshots & you will see that very clearly. The funniest part is that the book has been bound with hardcover with the picture of open court’s edition of Hilbert’s book. It looks quite original at first but I didn’t bought a hardcover book in the first place ! I have returned the book as I don’t want an illegal copy. Such a shame that Amazon allows such seller.Amazon needs to monitor the sellers in order to maintain quality & to stop the sellers from duping the customers.