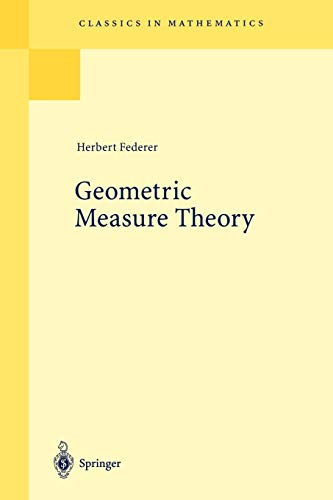 “This book is a major treatise in mathematics and is essential in the working library of the modern analyst.” (Bulletin of the London Mathematical Society)

Editorial Reviews: Review Review About the Author Biography of Herbert FedererHerbert Federer was born on July 23, 1920, in Vienna. After emigrating to the US in 1938, he studied mathematics and physics at the University of California, Berkeley. Affiliated to Brown University, Providence since 1945, he is now Professor Emeritus there. The major part of Professor Federer’s scientific effort has been directed to the development of the subject of Geometric Measure Theory, with its roots and applications in classical geometry and analysis, yet in the functorial spirit of modern topology and algebra. His work includes more than thirty research papers published between 1943 and 1986, as well as this book. Read more

⭐The book is encyclopedic, and has information (and proofs) about all sorts of things related to integration and measure, particularly Hausdorff measure and other low-dimensional measures in higher-dimensional space. Federer strives for the utmost generality, which sometimes makes proofs much longer than the traditional ones (when there are traditional ones; many theorems seem to be completely original),. The book is very compactly written and so I had trouble filling in the gaps in many cases. There is a fairly large number of misprints and other minor errors.

⭐had led a working seminar for graduate students, to work through Federer’s GMT, where Leon explained multiple chapters to the satisfaction of the students. Naturally I was annoyed at missing this golden opportunity. From that day until the present, I still have only the dimmest clue what the symbols in Federer’s book mean.Nevertheless, in my own efforts to present a coherent picture of just the alternating algebra part of the first chapter of the Federer book, I came to the conclusion that Federer was doing it the “wrong” way. He gives two ways of defining general tensors. One uses characterisation with a strong category theory flavour. The other definition uses a quotient space of equivalence classes of characteristic functions with finite support on linear space products. I now consider these to be the worst style of definitions possible for tensors. The rest of the book is much the same. Whenever it is possible to give a plain definition, Federer gives a convoluted incomprehensible definition.Be that as it may, Federer’s GMT is still the Mount Everest of geometric measure theory, where many climbers fail to reach the summit, and many fail to return to base camp. If you want to make someone give up hope of a future in mathematics, give them a copy of this book. Every year or so, I still leaf through a few pages of this book with regret. All I needed was another 30 IQ points, and I could have had a chance. I could have been a

⭐This is absolutely essential material to those wishing to apply the techniques of metric measure theory but is not a book to sit down and read. Instead buy both this book and Frank Morgan’s “Geometric Measure Theory”. Frank Morgan’s book is an easy read for a graduate student with a semester of real analysis completed and is beautifully intuitive and has many illustrations. Even more convenient, it refers directly to the theorems in Federer’s book by number so you can then go to Federer for the complete detailed proofs and the full general statements.

⭐abandon hope all ye who enter: this is the kind of thing that givesmath books a horrible reputation — absolutely impenetrable to the noninitiate — and written with what perversely seems almost to be adeliberate attempt at obfuscation — avoid like the plague

⭐First published in 1969 and initially intended as a reference for mature mathematicians and as a textbook for able students, this remarkable book constitutes the ultimate treatise on the subject still nowadays.It is written in an “economical” style, which means that you may well spend several hours in reading one single page (and there are 654 of them!). As a matter of fact, the author himself states in the preface that just chapter 2 is enough for a one-year graduate course.The contents are: 1 Grassmann Algebra. 2 General Measure Theory: Measures and measurable sets; Borel and Suslin sets; measurable functions; Lebesgue integration; linear functionals; product measures; invariant measures; covering theorems; derivates; Caratheodory’s construction. 3 Rectifiability: Differentials and tangents; area and coarea of Lipschitzian maps; structure theory. 4 Homological Integration Theory: Differential forms and currents; deformations and compactness; slicing; homology groups; normal currents of dimension n in R^n. 5 Applicatios to the Calculus of Variations: Integrands and minimizing currents; regularity of solutions of certain differential equations; excess and smoothness; further results on area-minimizing currents.Each chapter could have been published as a separate monograph for they are +100 pages long!To read this book you must have a solid background in analysis, topology, differential geometry, and algebra, plus having mastered some introductory text on the subject, like Morgan’s. Eventhough it is hard, the effort is worth it because it shows how to relate some concepts of analysis by means of algebraic or topological techniques.Includes extensive references though it lacks some motivation and explanations.Please take a look at the rest of my reviews (just click on my name above).

⭐I guess most people who want to learn geometric measure theory are analysts or interested in PDE. The first chapter is on algebra. I find the treatment too dry here. I’m fine with this abstract algebraic material, because I have long experience with algebraic geometry. But algebraic geometer and algebraist typically do not care too much about GMT. For the intended reader, analyst and probabalist, this treatment seems to me very inappropriate. Other reviewer mentioned that the author strived for generality. But generality ≠ unnecessary abstraction.