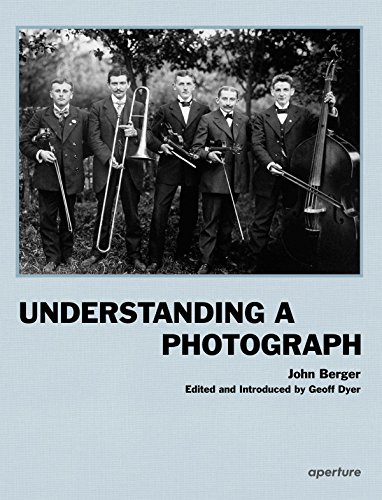 John Berger’s explorations of the relationships between the individual and society, culture and politics, and experience and expression through the written word, films, photographic collaborations and performances are unmatched in their diversity, ambition and reach. His television series and book Ways of Seeing revolutionized the way that art is understood. Now, Understanding a Photograph gathers the photography writings of one of the most internationally influential authors of the past 50 years. Understanding a Photograph is arranged chronologically, leading the reader on a thought-provoking journey through selected essays from hallmark works such as “About Looking” and “Another Way of Telling,” as well as previously uncollected pieces written for exhibitions or catalogues that discuss a wide range of artists—from August Sander to Jitka Hanzlová. This collection of some 25 texts has been carefully selected by novelist and essayist Geoff Dyer, who has also written a critical study of Berger’s oeuvre.

Editorial Reviews: Review This is a series of Berger’s essays, arranged chronologically, about photography’s role in the shaping of society. –American PhotoThis new selection of more than 20 essays, edited by Geoff Dyer and including previously uncollected pieces, is essential reading for anyone interested in understanding the power of this ubiquitous medium. Spanning some 40 years, they include pieces on the 1967 photograph of Che Guevara’s corpse, on the meaning of photographs…on the shock effect of war images… There are also typically insightful pieces on Paul Strand, W. Eugene Smith, André Kertész and Henri Cartier-Bresson… As ever with Berger’s writing, the theoretical is always informed by politics and a deeply felt humanity. –The Guardian About the Author John Berger is a novelist, poet, screenwriter, and critic. He is the author of numerous works of fiction and nonfiction, including To the Wedding, About Looking, and G., for which he was awarded the Booker Prize. Among his best-known works is the television series and book Ways of Seeing. He has received prestigious awards for his writing, including the Petrarca-Preis and a Golden PEN Award.Geoff Dyer is the author of a critical study of John Berger, Ways of Telling, and a critically acclaimed book on photography, The Ongoing Moment. He also has written four novels, and five genre-defying books, which include But Beautiful, awarded the Somerset Maugham Prize.

⭐This is a book of essays explaining the fundemental role of photography and what photography’s essence is, nothing more.The downside in my view is the paperback book I received has its print so small, I simply couldn’t read more than a page a day because it gave me headaches. I’ve never seen a book with such small print. I’ve attached a photo.

⭐This is a very eloquent and very, very intelligent reading. Although quality of printing of my copy has something to be desired. Anyway, he is an extremely talented observer and real connoisseur of historical photography. It is what makes John Berger such a wonderful practical critic and reader of individual photographs. Recommended.

⭐They tell me its an academic have to read, not so sure I agree but its an easy read with some interesting perspective to contemplate.

⭐Bought for an English class focused on photography. Not really a fun read and I disagree with a lot of the author’s views.

⭐Semi heavy writing, somewhat disjointed. Would not buy if I had been able to read a copy. Someone want mine?

⭐if you’re an aspiring photographer, this book is essential.

⭐This is required reading for all my photography classes. Lyrical and illuminating: Berger is still one of the greatest, most accessible authors writing about “seeing”.

⭐Overall this is a good read, but gets a little dry and has more of a political bent toward the end. Just my opinion.

⭐The beginning is great and that make it worth reading but there’s a lot of stuff put in at the end just to make a book out of it. Not too dated either and some comments that are relevant to later developments in digital photography. It might be interesting for photographers of the digital age to understand a bit the view of those from the analogical age. I prefer to say chemical personally; what was analogical about it?

⭐Real insight to the world of imaging and how it is used to influence the population of the world.

⭐A classic textbook for photography and visual arts students. Will remain on the reading lists for a long time.

Read more
Previous article
On Art and Artists: An Anthology of Diderot’s Aesthetic Thought 2011th Edition by Denis Diderot (PDF)
Next article
The Last Leonardo: The Secret Lives of the World’s Most Expensive Painting by Ben Lewis (PDF)