Mary Through the Centuries: Her Place in the History of Culture by Jaroslav Pelikan (PDF) 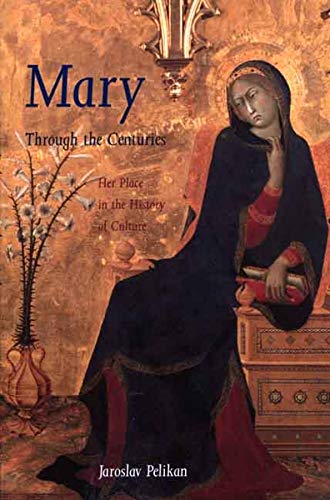 The Virgin Mary has been an inspiration to more people than any other woman who ever lived. For Catholics, Protestants, Jews, and Muslims, for artists, musicians, and writers, and for women and men everywhere she has shown many faces and personified a variety of virtues. In this important book, a world-renowned scholar who is the author of numerous books―including the best-selling Jesus Through the Centuries―tells how Mary has been depicted and venerated through the ages.Jaroslav Pelikan examines the biblical portrait of Mary, analyzing both the New and Old Testaments to see how the bits of information provided about her were expanded into a full-blown doctrine. He explores the view of Mary in late antiquity, where the differences between Mary, the mother of Christ, and Eve, the “mother of all living,” provided positive and negative symbols of women. He discusses how the Eastern church commemorated Mary and how she was portrayed in the Holy Qur’an of Islam. He explains how the paradox of Mary as Virgin Mother shaped the paradoxical Catholic view of sexuality and how Reformation rejection of the worship of Mary allowed her to be a model of faith for Protestants. He considers also her role in political and social history. He analyzes the place of Mary in literature―from Dante, Spenser, and Milton to Wordsworth, George Eliot, and Goethe―as well as in music and art, and he describes the miraculous apparitions of Mary that have been experienced by the common people.Was Mary human or divine? Should she be revered for her humility or her strength? What is her place in heaven? Whatever our answers to these questions, Mary remains a symbol of hope and solace, a woman, says Pelikan, for all seasons and all reasons.

⭐Jary Pelikan was once the dean of the Yale graduate school but he was also, and more importantly, the dean of church historians. The author of over thirty books, a number of which touched on the themes and materials of this book, he distilled his knowledge of Mariology for a wide audience in Mary Through the Centuries: Her Place in the History of Culture. The book begins at the literal beginning and comes down to contemporary times.Mary’s place in the life of the Roman church is explored at length. The virgin birth, her continuing virginity, her immaculate conception and her assumption into heaven, where she serves as queen or empress are subjects of faith that have arisen through dialogue, debate, special pleading, dissent and formal papal definition. Thus, her story is, in many ways, the church’s story and the story of the reformation and counter-reformation. With the Roman church’s focus on both revelation and tradition, Pelikan takes us through the thought of the church fathers, the church councils and successive papacies. He also takes us through the pertinent biblical texts. In doing so, he works in Aramaic, Latin, Greek and, in other contexts, French, English and, occasionally, Russian.This is thus a very learned book but one that is written with a very light touch in a totally accessible style. Those who had the privilege of knowing Jary will attest to the fact that he often spoke in the street vernacular (not in any crude way, but in a down-to-earth one). Thus, he is sometimes given to popular references and popular expressions which also make the book attractive and accessible to general readers.Mary’s place in the ‘history of culture’, of course, entails a great deal of focus on the plastic arts as well as on classical music. At one point in his life Jary considered becoming a classical pianist and one of his primary collaborators and friends was the great Yo-Yo Ma. In other words, he was not just a great polyglot historian, he was also an expert on cultural history. One of the particularly interesting sections of this book is his exploration of the Mariology of Goethe’s Faust, a subject on which he had written extensively.The book consists of 16 chapters. While the material therein is sometimes subtle and complex it is presented straightforwardly. The chapters are generally about 12 pp. in length, which makes for convenient reading.Bottom line: a fascinating book on a very important subject, done by a master scholar with a very human touch. Note that while the author was trained as a Lutheran minister (who was later received into the Orthodox Church in America) he writes as a historian. The book is conceived as an exploration of a historical subject, not as an aid to piety, though the piety of its author is not consciously suppressed. Note that he has written a comparable book on Jesus.

⭐Scholar Jaroslav Pelikan of Yale University once again writes a powerful historical and theological book, this time devoted to Mary, the Theotokos. He reveals the controversies between the Latin West (Roman Catholicism), the Eastern Church (Eastern Orthodoxy) and the Protestant movements and their many divergent views. He takes great care to present the facts, but also reveals the rumors and mystery of history, as well as history’s strengths and weaknesses.Regardless of one’s theological perspective on Mary and her place in the Christian life, this is must reading for anyone interested in doctrinal development throughout Christian history. His chapter on the “second Eve” is clear, concise, yet thorough and accessible to both those who are lay people and academics. This chapter naturally follows into the doctrine of the Theotokos and its importance in Marian doctrine; but more importantly, though not always stated, its importance in the doctrine of Christ. Pelikan shows its development, again, concisely and clearly.Also, very interestingly, Pelikan takes the reader to a not very well known area by many Western Christians and that is the early place Mary held in Islamic cultures and how the Quran pictures her in extremely warming language that it rivals most material elsewhere found in that text.He does not shy away from the controversial aspects of Mariology as well, to include the bodily assumption, the apparitions, and the Immaculate Conception. He shows how the doctrines developed and the problems each one caused between Protestants and Orthodox Christians. Agreements and differences are discussed without making this book into an apologetic for one view or the other (not that apologetic material is wrong, but would have greatly side tracked this text).This is just another outstanding work of which I have had the pleasure to read.

⭐As a Protestant convert to Orthodox Christianity I had the usual misgivings regarding the elevated role of Mary in the Orthodox and Catholic Churches. This book gives a thorough and scholarly approach to how marionology developed over the centuries in both the eastern and western traditions of the church. It was very helpful in enabling me to better appreciate why there is such a veneration of Mary even though there is not much biblical revelation about her. The most surprising thing to me was the Muslim connection to Mary. This book will certainly fill in your knowledge and appreciation for Mary and how she developed into such an icon of the church.

⭐Dense and confusing writing style, but not enough detail for my taste. Still, interesting if you can slightly through the language. I recommend Pelikan’s History of Doctrine series instead.

The Christian Tradition: A History of the Development of Doctrine, Vol. 3: The Growth of Medieval Theology (600-1300) (Volume 3) by Jaroslav Pelikan (PDF)

The Christian Tradition: A History of the Development of Doctrine, Vol. 4: Reformation of Church and Dogma (1300-1700) by Jaroslav Pelikan (PDF)

Whose Bible Is It? : A Short History of the Scriptures by Jaroslav Pelikan (PDF)