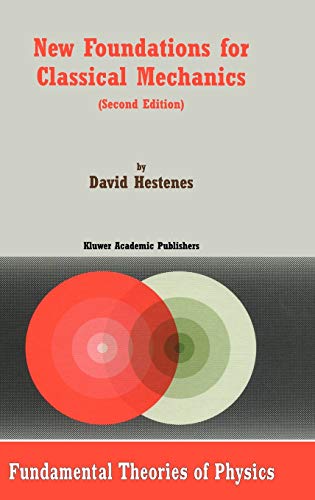 (revised) This is a textbook on classical mechanics at the intermediate level, but its main purpose is to serve as an introduction to a new mathematical language for physics called geometric algebra. Mechanics is most commonly formulated today in terms of the vector algebra developed by the American physicist J. Willard Gibbs, but for some applications of mechanics the algebra of complex numbers is more efficient than vector algebra, while in other applications matrix algebra works better. Geometric algebra integrates all these algebraic systems into a coherent mathematical language which not only retains the advantages of each special algebra but possesses powerful new capabilities. This book covers the fairly standard material for a course on the mechanics of particles and rigid bodies. However, it will be seen that geometric algebra brings new insights into the treatment of nearly every topic and produces simplifications that move the subject quickly to advanced levels. That has made it possible in this book to carry the treatment of two major topics in mechanics well beyond the level of other textbooks. A few words are in order about the unique treatment of these two topics, namely, rotational dynamics and celestial mechanics.

Editorial Reviews: About the Author David Hesteness is awarded the Oersted Medal for 2002. The Oersted Award recognizes notable contributions to the teaching of physics. It is the most prestigious award conferred by the American Association of Physics Teachers.

⭐, which is recommended enthusiastically by Hestenes.Although New Foundations for Classical Mechanics (NFCM) is primarily a physics book, it’s also intended to demonstrate the usefulness of geometric algebra (GA) in solving any sort of problem whose data and unknowns can be formulated as vectors.Several previous reviewers were more qualified than I to discuss the advanced aspects of this book. I review it from the viewpoint of someone who was considering Hestenes’ advice, expressed elsewhere, to employ geometric algebra in high-school classes. Of course I didn’t expect that New Foundations would be suitable for high schoolers. Instead, I wanted to decide whether GA might save students enough time in college to be worth introducing in high school. To that end, I worked many of the problems in the first 3-1/2 chapters, then skipped to chapter 5, where I have worked on only the first section. I also attempted, with mixed results,* to solve classic geometry problems via GA, especially those involving construction of circles tangent to other objects.That amount of experience is probably necessary to decide about trying GA in high schools. My own decision is a cautious “yes”, with some caveats regarding both GA itself, and this book.First, NFCM is definitely not a stand-alone textbook. Although Hestenes’ explanations of many topics are not only lucid, but genuinely thought-provoking, few people who tackle NFCM on their own will find it easy. But then, Hestenes never said it would be. As he noted on p. 39 of his Oersted Medal paper (see first comment, below, for all references in this review),”… I had to design [New Foundations] as a multipurpose book, including a general introduction to GA and material of interest to researchers, as well as problem sets for students. It is not what I would have written to be a mechanics textbook alone. Most students need judicious guidance by the instructor to get through it.”By the way, anyone who’s considering teaching GA anywhere should read that paper to learn from Hestenes’ own travails.Since I had no instructor to give me judicious guidance, I read several papers on GA by Hestenes and others. The lectures and problem sets from Cambridge University were helpful up to the point where they became too advanced for me. Another good reference was Ramon Gonález Calvet’s “Treatise of Plane Geometry through Geometric Algebra”. The chapters from the previous edition of NFCM that Hestenes maintains online offered many valuable perspectives.However, all of those resources couldn’t make up for the lack of a good solutions manual, with plenty of additional worked-out examples. If I could make just one suggestion to Hestenes for facilitating adoption of GA, this would be it. Ideally, the manual would also show how to explore GA using computer software such as GAViewer, or even CaRMetal (which I plunked along with). I suspect Hestenes would agree with all of these recommendations.IN SUMMARYThis is a good book for learning to use GA, if used as Hestenes intended. I’m convinced that GA is worth trying to teach at the high school level. I don’t expect that it would be any easier to teach than the geometry and trig that it would replace, but it should pay off better down the road.Please note that Hestenes and his colleagues have also done extensive research on teaching physics. The “Modeling Instruction in Physics” method they developed has given good results. (See links.)* EDIT 1 August 2014: Geometric Algebra actually works quite well for solving “construction” problems. When I wrote this review in 2010, I hadn’t yet learned to frame the problems as needed to make use of GA’s strengths. The contrasts between how to frame problems for solution via GA and via “ruler-and-compass” are thought-provoking. See the link “Classical vs GA Solutions” in the first comment.

⭐This is surely one of the best introductory books to start from, learning the Geometric Algebra (Clifford Algebra). The author is generous in exposing his phlosophical views, especially on the meaning of number concept and how to extend it. This is surely very valuable, though nobody can get %100 percent of what another one is trying to convey in written form. Ofcourse this also, and perhaps mostly, depends on the conformity between the ways of thinking and orientations of the two brains: Those of the author and reader. In this respect I am fully indebted to him in that I have gained new points of view. For example the multiplication of two real numbers, and especially that of a real number (scalar) and a vector, is no more a pre-given external operation to the Geometric Algebra since both the scalars and vectors are members of this same set and thus their multiplication is nothing different than that of other elements of this algebra. May be not for some body else, but for me, this is a new and profound approach. Also many thanks are due to the historical insights and highlighting, again quite generously, provided in the text.Yet the axiomatic development of the subjext given Chapter 1 is unfortunately rather sloppy. But it should be obvious that axiomatization, by definition, if not carried out rigorously may become quite confusing, if not annoying. This should be the same, whether the treatment is introductory or not. For example, yet just at the start of the axiomatization process, the algabre being defined is expressed to consist of the sums of all k-blades (Eq.7.1). Whether this is a loose definition or the result of something following is by no means clear. Only upon very carefully studying and striving, it is understood that the a.m expression, although very loosely introducing the terms of k-blade and k-vector, is not a definition. It might well be an insightful theorem which could be given a recursive-constructive proof. But alas! No explanation and not a single word on this. Being axiomatic is, obviously, not the equivalent of dryness but rather of rigour. Thus it should not, by no means, exclude presenting explanation where danger of confusion is clear. The same confused style of presentation unfortunatly pervades and continues untill the end of this chapter, where the axiomatic foundations are laid. What should actually be recursive definitions of k-vectors are given as axioms in Eq. 7.13a and 13b. Without the slightest explanation on the meaning of equality of two members in this algebra, the reader is put face to face with an unnecessary puzzle in exercise 7.1, which the author qualifies as some logical fine point.Any body looking for some rigour surely shall need a companion text, of which the best, as far as I know, is “Clifford Algebra to Geometric Calculus” which the same author co-authors. Finally and for the sake of fairness, I should make it explicit that this book I am reviewing is quite better than the much praised “Geometric Algebra for Physicists ” by Chris Doran-Anthony Lasenby in respect of all above criticisms.

⭐While I found this a reasonably well-written text, I judge a book based upon how well it stands on its own – that is, can I read the book, work through the exercises, and acquire a grasp of the topic. While this is a much clearer and more accessible intro to geometric algebra than Hestene’s “Clifford Algebra to Geometric Calculus”, it is more the type of book which would accompany a class in GA, where the instructor fills-in the gaps, rather than a stand-alone text. The worked exercises are relatively few, and are typically of the nature: start with this, magic, more magic, resulting answer. It lacks sufficient explanation, is not self-contained, but this can be partially overcome with additional resources.

⭐Hestenes had dedicated most of his career to developing Geometric algebra which, by some aberration, the maths community glossed over. They seemed to decide that Clifford’s geometric algebra meant algebra rather than geometry. As a consequence the physicists have been left to fend for themselves and produced some beautiful routes to deeper intuitive understanding and easier practical means of working in multidimensional spaces. This book (I’m told) is the most accessible entry into the subject. I certainly find it very good as far as I’ve gone. Not least for the many excellent diagrams and exercises based on actual application of the ideas rather than bald examples of doing theoretical proofs, which so many algebra books use as a cop-out, leaving the student with working tools and no idea of where to apply them other than following like sheep. The very practical outlook of the book in using real geometrical insight and showing the profound benefit that the geometric product gives over mere exterior algebra in both solving and penetrating the exploitation of graded structures for separating out scalars and invariant features is masterly. The student aware of these insights is much better equipped to go on into differential geometry, complex analysis and eg. projective or conformal geometry or invariant theory. It’s certainly helped me considerably in the latter topics.The main disappointment about the book is however that geometric calculus, the development into differential geometry, is not covered in the same volume, though instead the many examples across a wide range of practical applications give the physicist many valuable insights into many areas of mechanics..

⭐The content gets 5 stars.My overall rating takes into account the quality of the printed article, which is not to the standard I expect for such an expensive paperback. Printed in Poland by Amazon Fulfillment, it falls far short of the quality of, say, a Cambridge University Press paperback, who I do not believe would have charged much differently if they were the publisher. That said it is certainly not the worst quality paperback printing I have encountered recently.

⭐Nice formalism applied to classic mechanics. A nice book, easy to read, very pleasant. A must have for a mathematics

Clifford Algebra to Geometric Calculus: A Unified Language for Mathematics and Physics (Fundamental Theories of Physics, 5) by D. Hestenes (PDF)