Purified by Fire: A History of Cremation in America 1st Edition by Stephen Prothero (PDF) 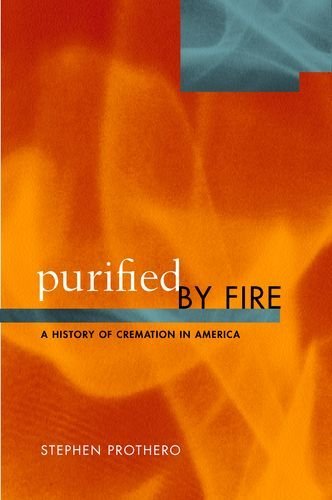 Just one hundred years ago, Americans almost universally condemned cremation. Today, nearly one-quarter of Americans choose to be cremated. The practice has gained wide acceptance as a funeral rite, in both our private and public lives, as the cremations of icons such as John Lennon and John F. Kennedy Jr. show. Purified by Fire tells the fascinating story of cremation’s rise from notoriety to legitimacy and takes a provocative new look at important transformations in the American cultural landscape over the last 150 years.Stephen Prothero synthesizes a wide array of previously untapped source material, including newspapers, consumer guides, mortician trade journals, and popular magazines such as Reader’s Digest to provide this first historical study of cremation in the United States. He vividly describes many noteworthy events—from the much-criticized first American cremation in 1876 to the death and cremation of Jerry Garcia in the late twentieth century. From the Gilded Age to the Progressive Era to the baby boomers of today, this book takes us on a tour through American culture and traces our changing attitudes toward death, religion, public health, the body, and the environment.

⭐As a funeral director, and for me personally, cremation is a fascinating subject.Stephen Prothero’s book, “Purified by Fire,” takes an interesting and enlightening look at one of the oldest methods of “disposition” in the world. It also explains the origins of the rite of cremation in America in an easily understood language, and removes the “shroud” of mystery of the cremation of the dead.A fantastic read for any who wonder about death rites – and any who actually wonder about any type of history in the United States.Prothero has gone the extra mile in gathering information for the reader. He takes the door off the columbarium and crematorium and allows us to take a look inside. He gives us the background: that cremation was brought to the United States by those who were concerned about disease in the dead; then gives us a glimpse into the future: that cremation is gaining popularity, even by those in the major religious denominations.From “Birth” to “Boom”, Prothero unleashes his magic of writing and works it into a magnificent MUST READ that I refer to as “The Cremationist’s Bible”.

⭐I found the book very repetitious. He kept going back over and over about what people did and thought back in the 1800’s Once was enough. He is obviously pro cremation and is more than antagonistic towards Christianity I think and how they relate/think about the subject. People feel the way they feel and they aren’t necessarily ignorant or brainwashed by religion because of it. He wants to promote the liberal side of religion and how sensible they are and on and on. He really does go on and on about the same thing. The book could have been much shorter.By the way, I attended a symposium at Forest Lawn in 2003 where Prothero was a speaker along with others. At the end, questions were directed to the speakers. And someone asked Prothero whether he had children or not to which he answered yes, and it was a child of just a few years. The person asked him that if his child died, would he cremate them. It stumbled Prothero who finally answered that he would NOT.

A Nation of Religions: The Politics of Pluralism in Multireligious America by Stephen Prothero (PDF)

God Is Not One: The Eight Rival Religions That Run the World–and Why Their Differences Matter by Stephen Prothero (PDF)

Religious Literacy: What Every American Needs to Know–And Doesn’t by Stephen Prothero (PDF)

Read more
Previous article
The Conspiracy against the Human Race: A Contrivance of Horror by Thomas Ligotti (PDF)
Next article
Hagarism: The Making of the Islamic World by Patricia Crone (PDF)