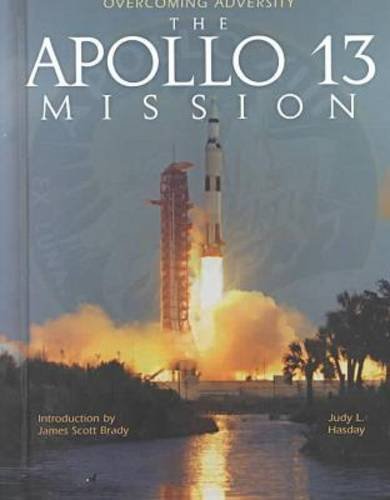 Describes the ill fated flight of Apollo 13 when an explosion forced the crew to abandon plans for a lunar landing and embark on a dangerous journey back to Earth.

Editorial Reviews: From School Library Journal Gr 6-9-This businesslike profile of the spacecraft’s anything-but-routine course won’t keep readers riveted the way the Tom Hanks movie will, but it does put the mission into historical context while providing a compact history of the first decade or so of our space program. Hasday describes that program’s genesis and development, introduces the astronauts assigned to Apollo 13, and then takes readers through the disastrous mission, from liftoff to reentry. Her tone is, to say the least, dispassionate: “[Haise] wandered over to the LM’s window, hoping to get a good view of the receding moon, when suddenly he heard a `thump-bang-shudder’ similar to the one they’d heard during the explosion.-As it turned out, the battery had exploded. But even counting the sharp reduction of power, this latest problem was not life threatening.” Black-and-white photos include formal portraits, slightly blurry shots taken aboard the spacecraft, and views of calm-looking, crewcut men working the boards at Mission Control. Unlike other accounts for young people, this is not all recycled material; the author appends a transcript of an interview with Apollo 13’s Lead Flight Director, Gene Kranz. His sometimes-unexpected comments about the mission and his role in its rescue may prompt older readers to look up his book, Failure Is Not an Option: Mission Control from Mercury to Apollo 13 and Beyond (S & S, 2000). Students more interested in information than an adrenaline rush will find Hasday’s title valuable.-John Peters, New York Public LibraryCopyright 2001 Cahners Business Information, Inc.