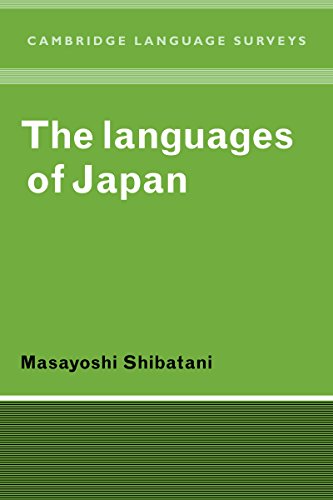 This book is a detailed survey of the two main indigenous languages of Japan, Japanese and Ainu. No genetic relationship has been established between them, and structurally they differ significantly. Professor Shibatani has therefore divided his study into two independent parts. The first is a most comprehensive study of the polysynthetic Ainu language. The second part deals extensively with Japanese. It discusses topics from the evolution of the writing system and the differences between men’s and women’s speech, to issues of greater theoretical complexity, such as phonology, the lexicon and word-formation, and the syntax of agglutinative morphology. As an American-trained scholar in Japan, the author is in an unique postion that affords him a dual perspective on language deriving from Western linguistic scholarship and the Japanese grammatical tradition.

⭐Masayoshi Shibatani’s THE LANGUAGES OF JAPAN, an entry in the Cambridge Language Surveys series, covers but two languages within its pages: Ainu and Japanese. The book is especially valuable for its inclusion of the former, as until recently little scholarship had been done on English on this endangered minority language of northern Japan.I was especially pleased with Shibitani’s survey because it is refreshingly diachronic. His first concern in presenting each language is to summarize the various disagreements over genetic affiliation. Ainu’s status as an isolate seems secure and theories relating it to other languages seem quaint, but Shibitani gives what seems to be cutting-edge evidence of Japanese as an Altaic superstratum on an Austronesian substratum. The development of the modern phonology out of earlier forms is also discussed, including the problem of the Old Japanese vowel system. There’s also some discussion of the evolution of the lexicon, and which dialects retain what. There may be some outcry over Shibatani’s decision to consider Ryukyuan a dialect of Japanese, but in forming the survey he seems to have decided to see Japan as having two main languages on the basis of the uncertain origin of each. Since Rykyuan and Japanese are from a common source, they are grouped together. In fact, Shibatani writes, “Once a genetic relationship is established between two languages, it is a moot point whether to regard them as two languages or as two dialects of the same languages.” The work also includes a substantial synchronic discussion of general grammar and word-formation.I felt that I, in spite of his attempt to clearly present these languages, I would have gotten far more out of the book if I had better Japanese. The book is not as suitable for hobby reading by the linguistics student as other entries in the Cambridge Language Survey series. Nonetheless, it’s worth look at for those interested in Japanese and the little-documented (in English at any rate) Ainu language.

⭐First, whether Ryukyuan is a “dialect” or a “separate” language is just a matter of semantics. As the author states, the only difference between the two is, in most cases, the presence of a separate government. In Japan’s case, the Ryukuu islands are a part of Japan, and are therefore their old dialects are just dialects. Also, in the Japanese language, they are refered to as “hogan”, which means “dialect” in English. If these islands were a separate nation, they would be a “different language”, in the same way that Portuguese is a “different” (i.e., not a dialect) from Spanish. Ultimately, the thing to remember is that they are (were): 1. a closely related part of the small Japanese linguistic family, and 2. very difficult to understand for other Japanese speaking the other major dialects in northern, southern, and central Japan.Anyway, I loved this book. After having learned Japanese, it was a pleasure to read an academic (but easy to understand) survey of the language, its dialects, and its history. Indeed, this book launched my amateur fascination with linguistics; perhaps someday I shall go so far as to get a degree in it. Now, I am reading an interesting book on African linguistics, but that calls for a separate review.Defintely, buy this book! It is well worth the pocket change that they ask. The Ainu section is indeed a bit disappointing, but ultimately there was little information gathered on that language to begin with, and it is probably too late, since the language is essentially dead now.

⭐Linguists (especially English-speaking ones) would do well to look to the Japanese language and test their theories against it *first* before making o’erhasty generalizations about language. I turned to this book after reading Anna Wierzbicka’s work on ‘semantic universals’ and found that it validated my ideas that there is no exact equivalent in the Japanese language for the English word ‘you’ (or ‘Du’ in German, ‘tu’ in French, etc.). However, Shibatani’s work is enjoyable and very informative. Non-linguists can (I think) understand it without much difficulty, and students of Japanese (as well as native speakers!) may enjoy his overview of the history and development of the language. He also goes out of his way to disprove certain ‘myths’ about Japanese. Plus it has a bibliography of works in both Japanese and English.I sincerely hope more books of this kind will emerge.

⭐The book consists of 2 parts, 85 pages of Ainu grammar, and some 300 pages of information on Japanese; both parts are very interesting and often original.Grammars of Ainu are rare (and expensive), so this one is very welcome. Ainu (Classical Ainu and its several modern dialects) is described as a relatively simple language of the agglutinative and incorporating type, with limited morphological and syntactic complexity, unlike the surrounding Japanese and Korean languages, but with two very uncommon features: 1. the basic meaning of the verb is static, so often it represents a past tense or a passive; and 2. the use of “applicative particles”, particles that are prefixed to a verb, which allow the indirect object or the location to become the direct object. The consequences and interplay of these features are discussed with enough examples.The 300 pages about Japanese cover its genetic affiliation (hesitantly Eurasian), history (including information about Old Japanese), lexicon, phonology, dialects (with pitch differences), word formation, and grammatical structure (130 pages).Japanese emerges from the description not as a single language but as a language group consisting of between 30 and 50 often mutually unintelligible dialects, which in many cases might as well be called separate languages. A historical explanation of this state of affairs is given, with examples of developments and innovations spreading from the cultural centers.

Essays in Semantics and Pragmatics: In honor of Charles J. Fillmore (Pragmatics & Beyond New Series) by Masayoshi Shibatani (PDF)