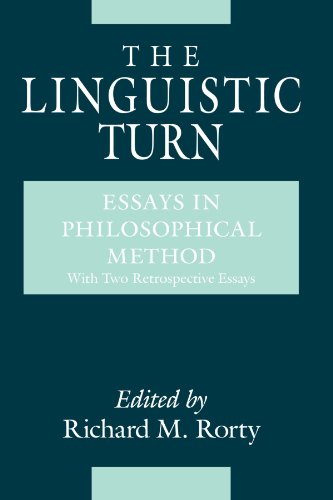 The Linguistic Turn provides a rich and representative introduction to the entire historical and doctrinal range of the linguistic philosophy movement. In two retrospective essays titled “Ten Years After” and “Twenty-Five Years After,” Rorty shows how his book was shaped by the time in which it was written and traces the directions philosophical study has taken since. “All too rarely an anthology is put together that reflects imagination, command, and comprehensiveness. Rorty’s collection is just such a book.”—Review of Metaphysics

Editorial Reviews: About the Author Richard Rorty (1931-2007) was one of the world’s most influential cultural philosophers. During the course of his academic career he taught at Wellesley College, Princeton University, the University of Virginia, and Stanford University.

⭐Editor Richard Rorty explains in the Preface of this 1965 collection, “This anthology provides materials which show various ways in which linguistic philosophers have viewed philosophy and philosophical method over the last thirty-five years. I have attempted to exhibit the reasons which originally led philosophers in England and America to adopt linguistic methods, the problems they faced in defending their conception of philosophical inquiry, alternative solutions to these problems, and the situation in which linguistic philosophers now find themselves. I have not attempted to cover all the methodological issues which have been raised by opponents of linguistic philosophy…. I hope, however, that I have included the issues and quarrels which have been most important to the development of linguistic philosophy.”He explains in the (very helpful) Introduction, “All linguistic philosophers talk about the world by means of talking about a suitable language. This is the linguistic turn, the fundamental gambit as to method, on which ordinary and ideal language philosophers agree. Equally fundamentally, they disagree on what is in this sense a ‘language’ and what makes it ‘suitable.’ Clearly one may execute the turn. The question is why one should. Why is it not merely a tedious roundabout?” (Pg. 8) Later, he adds, “The linguistic turn in philosophy is a reaction against the notion of philosophy as a discipline which attempts the solution of certain traditional problems—problems (apparently) generated by certain commonsense beliefs. If philosophy in the future becomes Heideggerian meditation, or… becomes the activity of constructing new language-games for the sheer joy of it…if in short, philosophers drop their traditional conception of the nature of their discipline—then linguistic philosophers will have nothing left to criticize.” (Pg. 23)He continues, “For, despite their dubious metaphilosophical programs, writers like Russell, Carnap, Wittgenstein, Ryle, Austin, and a host of others have succeeded in forcing those who wish to propound the traditional problems to admit that they can no longer be put forward in the traditional formulations. These writers have not, to be sure, done what they hoped to do. They have not provided known-down, once-and-for-all demonstrations of meaninglessness, conceptual confusion, or misuse of language on the part of philosophers they criticized… it would be astonishing if they HAD done any of these things… Linguistic philosophy, over the last thirty years, has succeeded in putting the entire philosophical tradition… on the defensive. It has done so by a careful and thorough scrutiny of the ways in which philosophers have used language in the formulation of their problems. This achievement is sufficient to place this period among the great ages of the history of philosophy.” (Pg. 33)Ironically, in Rorty’s ‘Twenty-Five Years After’ essay that closes the book, he admits of this last sentence, “This last sentence now strikes me as merely the attempt of a thirty-three-year-old philosopher to convince himself that he had the luck to be born at the right time—to persuade himself that the disciplinary matrix in which he happened to find himself… was more than just one more philosophical school, one more tempest in an academic teapot. It now seems to me to have been little more than that. The controversies which I discussed with such earnestness in 1965 already seemed quaint in 1975. By now they seem positively antique.” (Pg. 371)A very broad selection is included, including writings by philosophers such as Moritz Schlick, Rudolf Carnap, Gilbert Ryle, John Wisdom, Norman Malcolm, Alice Ambrose, W.V.O. Quine, Roderick Chisholm, etc.Despite Rorty’s later reservations, this collection will be of great interest to those studying linguistic philosophy.

⭐For much of the 20th century, it was quite fashionable to believe that philosophical problems were all problems of language, and that if philosophers paid close enough attention to ordinary usage (or, alternately, devised an ideal language free of the muddles and inconsistencies of ordinary language), then philosophical problems would simply disappear. This was the linguistic turn. I have a number of anthologies on this movement, and Rorty’s is far and away the best. Rorty has assembled some of the finest examples of ordinary language philosophy (such as Malcolm’s “Moore and Ordinary Language”) and ideal language philosophy (like Carnap’s “Empiricism, Semantics and Ontology”). But most of the volume is taken up with critical evaluations and appraisals of these movements in philosophy. Rorty’s selections are extremely judicious and show a real mastery of the field.Speaking of mastery, one of the most valuable essays in the volume is Rorty’s own lengthy introductory essay. In this essay, Rorty brilliantly lays out the philosophical foundations of ordinary language philosophy and ideal language philosophy and the philosophical problems they encounter. It is difficult to convey what a phenomenal work this essay is. It displays the ability to master, synthesize, and distill literally decades of philosophy into a narrative essay which is itself a masterpiece of critical philosophy. This is Rorty at his finest.

⭐This book is a vrey valuable book. Can you tell me Mr.Racard Rorty’adressof E-mail?

⭐This book is exactly what I was hoping for: am overview of the fundamental change that came over philosophy in the 20th century when the field began to scrutinize language and its connections to logical analysis. Very wonderful companion to the study of analytic philosophy or those who are studying pragmatism (particularly Rorty’s ‘neo-pragmatism’).