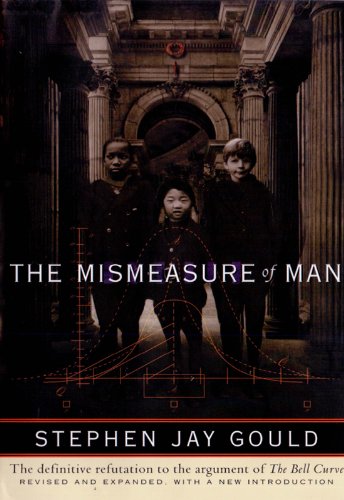 The definitive refutation to the argument of The Bell Curve.When published in 1981, The Mismeasure of Man was immediately hailed as a masterwork, the ringing answer to those who would classify people, rank them according to their supposed genetic gifts and limits.And yet the idea of innate limits—of biology as destiny—dies hard, as witness the attention devoted to The Bell Curve, whose arguments are here so effectively anticipated and thoroughly undermined by Stephen Jay Gould. In this edition Dr. Gould has written a substantial new introduction telling how and why he wrote the book and tracing the subsequent history of the controversy on innateness right through The Bell Curve. Further, he has added five essays on questions of The Bell Curve in particular and on race, racism, and biological determinism in general. These additions strengthen the book’s claim to be, as Leo J. Kamin of Princeton University has said, “a major contribution toward deflating pseudo-biological ‘explanations’ of our present social woes.”

⭐This is Stephen Jay Gould’s magnum opus, alongside Wonderful Life! In this book, he presents his own critique of biological determinism, the idea that “social and economic differences between human groups – primarily races, classes, and sexes – arise from inherited, inborn distinctions and that society, in this sense, is an accurate reflection of biology” (pg. 52). Gould looks into the history of scientific studies that have been used to justify such an idea, from skull measurements showing differing levels of intelligence by race to IQ tests used to justify eugenics policies. Of course, he doesn’t simply rant about the conclusions of these scientific studies; he attacks the premises they’re based on (biased sample sizes for skull measurements, converting the abstract concept of intelligence into a physical entity, etc.).This book was originally published in 1981 with an expanded and revised version published in 1996, so why is this book relevant today? The rise of the alt-right has brought with it a revitalized interest in the supposed link between IQ and race. Many figures of the alt-right tend to cite The Bell Curve (a book which argues that human intelligence is a predictor of personal success, as well as presenting a link between race and IQ), and the expanded and revised version of The Mismeasure of Man offers a critique of The Bell Curve. Even the academic sphere is seeing a resurgence of biological determinism, in the form of evolutionary psychology. Many figures in the men’s rights movement tend to use evolutionary psychology to justify rape. While Gould never addresses evolutionary psychology, he does briefly criticize its predecessor, sociobiology. Both sociobiology and evolutionary psychology are based on the same faulty premise of human nature being biologically determined. I will end this review with a quote from the book which perfectly summarizes the pernicious idea of biological determinism:”It is fundamentally a theory about limits. It takes current ranges in modern environments as an expression of direct genetic programming, rather than a limited display of much broader potential” (pg. 360-361).

⭐The Mismeasure of Man Stephen Jay GouldThe late prolific writer of natural history and natural selection concludes his The Mismeasure of Man with a line from Darwin,”If the misery of our poor be caused not by the laws of nature, but by out institutions, great is our sin.”In The Mismeasure of Man, Gould yields perspectives on three centuries of race and racism, and how men of the fledgling school of psychology attempted to qualify and quantify their new science by half baked theory and methodology followed by bastardizing the intent of Binet’s intelligence testing. Binet said “intelligence cannot be abstracted as a single number. IQ is a helpful device for identifying children in need of aid, not a dictate of inevitable biology.”Much of Gould’s manuscript concentrates on those, much to the contrary of Binet’s intent, who carried intelligence testing and ratings to obscene levels.Gould explains and refutes the examples of statistical analysis used by the early to mid 20th century psychologists, which formed the basis for the Herrnstein and Murray 1994 work, The Bell Curve. Gould writes in regard to The Bell Curve, “So long as people remain on the top of the Social heaps by accident of a noble name or parental wealth, and so long as members of despised castes cannot rise, whatever their talents, social stratification will not reflect intellectual merit.” Though quite often long in word, Gould attacks and documents how this intellectual racism has and continues to inject itself into our culture.Gould analyzes how “passive acceptance of common wisdom, of upper class Victorian males” evolved into “potent and evil nonsense that passed for certain knowledge,” and the repercussions that have historically manifested themselves. This became all too apparent with certain ethnic groups, Jewish refugees from Central Europe in particular, wishing to escape the coming Nazi holocaust, who sought to emigrate, were refused entry due to “eugenic propaganda”due to quotas based upon intelligence testing.Gould was a prolific writer, whose voice, now absent, is needed more than ever.The Mismeasure of Man, at times is a tough read, in particular the sections covering statistics and factor analysis, but Gould enables the reader to understand the continual fallacy of effort to quantify intelligence with a single number, and how this has affected us historically, and continues to do so today.

⭐A very interested read that address scientific racism and how science historically has skewed its results and views based on the scientific communities racist ideology.

⭐Given all the garbage that has been said about IQ, this book is an important reminder of what IQ measurement really is and the ugly racist history that has long plagued the field. The book has two main parts: first, the history of intelligence measurement itself and second, what modern IQ tests really measure, and how they do it. Eye opening.

⭐This book is so easy to read, apart from chapter 6- too much mathematics for me. An excellent critique of the development of IQ testing. Refreshingly honest and personal too. Although be warned some aspects of the history of IQ testing will make your blood boil – Gould identifies and challenges racism and social injustice at each stage.

⭐An excellent history of the IQ test originating in France as a means of identifying school children who required extra tuition but which later became a tool of discrimination in the USA. IQ was never claimed to be a fixed value and could be increased. Also, that intelligence cannot be reduced to a number. A well researched book.

⭐Recommended for anyone interested in science and its history, or at least that particular part of it. Somewhat demanding text if not familiar with the way scientists tend to write.

⭐An author who places truth at the forefront of human’s request for knowledge, debunking the convenience of pseudoscience.

I Have Landed: The End of a Beginning in Natural History by Stephen Jay Gould (PDF)

Ever Since Darwin: Reflections in Natural History by Stephen Jay Gould (EPUB)

The Hedgehog, The Fox And The Magister’s Pox: Mending and Minding the Misconceived Gap Between Science and the Humanities by Stephen Jay Gould (PDF)

Leonardo’s Mountain of Clams and the Diet of Worms: Essays on Natural History by Stephen Jay Gould (EPUB)

Full House: The Spread of Excellence from Plato to Darwin by Stephen Jay Gould (PDF)

Wonderful Life: The Burgess Shale and the Nature of History by Stephen Jay Gould (PDF)

Read more
Previous article
Dawkins vs. Gould: Survival of the Fittest (Revolutions in Science) by Kim Sterelny (1-Mar-2007) Paperback by (PDF)
Next article
Mathematics Education in the Early Years: Results from the POEM3 Conference, 2016 by Christiane Benz (PDF)