Why I Am Not a Secularist by William Connolly (PDF) 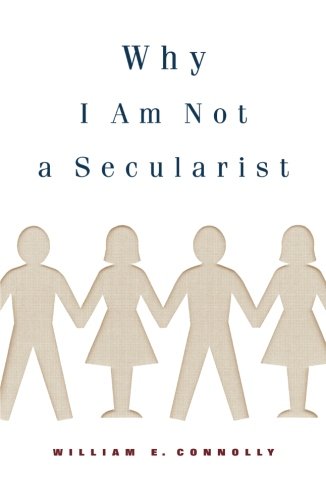 Philosophy/Political Science Challenges the limitations of traditional secularism-now in paperback! Religion’s influence in American politics is obvious in recent debates about school prayer, abortion, and homosexuality. Many liberal secularists decry this trend, rejecting any interaction between politics and religion. But in Why I Am Not a Secularist, distinguished political theorist William E. Connolly argues that secularism, although admirable in its pursuit of freedom and diversity, too often undercuts these goals through its narrow and intolerant understandings of public reason. In response, he crafts a new model of public life that more accurately reflects the needs of contemporary politics. “This is a first-rate book by one of the most creative political theorists in the country. As powerful as it is original.” Stephen White, Virginia Polytechnic Institute and State University “William Connolly is one of the subtlest, boldest, and most intellectually fertile political/moral theorists now writing in the United States. His book is an incisive critique of dogmatic rationalism, an immensely valuable analysis of the psycho-social dynamics of ‘identity politics’-both local and global-and a compelling argument for a strenuous and potentially self-transforming ethics of ‘critical engagement.'” Barbara Herrnstein Smith, author of Belief and Resistance William E. Connolly is professor of political science at the Johns Hopkins University. Translation Inquiries: University of Minnesota Press

Editorial Reviews: About the Author William E. Connolly is professor and chair of political science at the Johns Hopkins University.

⭐I was disappointed that for me, the title “Why i am not a Secularist” only covered the introduction and first chapter of the book. The other 6 chapters could have free standing essays, barely connected to the first few by a few sentences here and there. I probably would not have purchased the book had i known it was a collection of essays.By the title, Connolly, who admits that he is a secular liberal, declares himself not to be a secular-ist, in the sense of a dogmatic, close minded person who will not be happy until every vestige of religiosity is removed from the public square. It is refreshing that Connolly makes this admission, rather than pretending that he has no ideology, only his adversaries do. He tries to create a space where dialogue can occur between secularists and religionists. He does so partly out of concern for his own side, the secularists, because he thinks that the religionists have ‘stolen’ the visceral, passionate side to many public arguments, while liberals are then ‘stuck’ with the merely rational arguments, although this is at best a backhanded compliment to the religious.Connolly, citing John Mill and others, shows how the enlightenment did develop, only could have developed, and still lives off of the moral capital, of the Christendom it replaced.In chapter 6, entitled “An Ethos of Engagement,” Connolly proposes various exercises which he hopes would create better dialogue between secularists and religionists, rather than the dialogue of the deaf which we now have. He calls for more openness, to admitting that some or all of your own beliefs are contestable and desanctifiable. Fine. But then on pp. 146-147, he gives only one example, a lengthy description of how one who began the engagement rock solid against assisted suicide could become more ‘open’ to it, until you are positively for assisted suicide. No examples of anyone entertaining liberal positions transcending them to become more conservative. Lest one doubt Connolly’s left credentials, there are extended chapters against capital punishment and William Bennett, not to say the former for the latter!If you can find this in a library, read the introduction and first chapter; the rest is predictable liberal micro-politics.However, it behooves Western religionists to sympathize more with its ‘child’, enlightened secularism, and their mutual grandchildren, the physical sciences, representative democracy, the use of reason and not blind fideism.And it behooves Western secularists to be more appreciate of Western religionists, who are of a benign variety and who have long given up the idea of forcibly controlling those area of society properly secular, as mandated in the Catholic church since the Second Vatican Council in the 1960’s, so as better to understand and withstand a culture which makes no such concessions, like Islam.

Previous article
The Laughing Jesus: Religious Lies and Gnostic Wisdom by Timothy Freke (PDF)
Next article
Ancient and Medieval Memories: Studies in the Reconstruction of the Past by Janet Coleman (PDF)