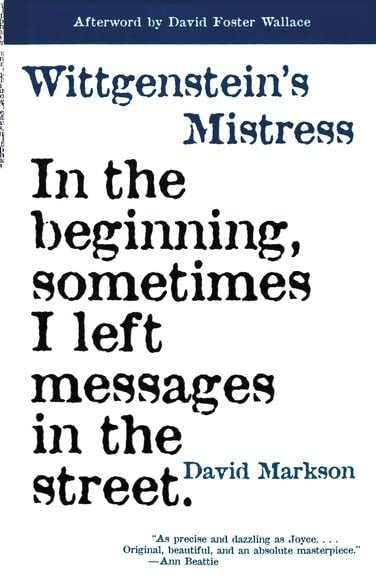 Wittgenstein’s Mistress is a novel unlike anything David Markson or anyone else has ever written before. It is the story of a woman who is convinced and, astonishingly, will ultimately convince the reader as well that she is the only person left on earth.Presumably she is mad. And yet so appealing is her character, and so witty and seductive her narrative voice, that we will follow her hypnotically as she unloads the intellectual baggage of a lifetime in a series of irreverent meditations on everything and everybody from Brahms to sex to Heidegger to Helen of Troy. And as she contemplates aspects of the troubled past which have brought her to her present state―obviously a metaphor for ultimate loneliness―so too will her drama become one of the few certifiably original fictions of our time.“The novel I liked best this year,” said the Washington Times upon the book’s publication; “one dizzying, delightful, funny passage after another . . . Wittgenstein’s Mistress gives proof positive that the experimental novel can produce high, pure works of imagination.”

Editorial Reviews: Review “Beautifully conceived. An irresistible, captivating book!” (Walter Abish)“Beautifully realized. Initially as hypnotically calming as an afternoon snowfall, then, by stages as menacing and yet thrilling as a nocturnal blizzard. This is Markson in the post-Beckett Gaddis country, staking his own claim, in a territory nobody else has the courage or the strength to inhabit and survive in.” (James McCourt)“Provocative, learned, wacko, brilliant, and extravagantly comic. This is a nonesuch novel, a formidable work of art by a writer who kicks tradition out the window, then kicks the window out the window, letting a splendid new light into the room.” (William Kennedy)“Unsettling, shimmering . . . compelling.” (Publishers Weekly)“A work of genius . . . an erudite, breathtakingly cerebral novel whose prose is crystal and whose voice rivets and whose conclusion defies you not to cry.” (David Foster Wallace)“Brilliant and often hilarious . . . Markson is one working novelist I can think of who can claim affinities with Joyce, Gaddis, and Lowry, no less than with Beckett.” (San Francisco Review of Books)“Addresses formidable philosophic questions with tremendous wit . . . remarkable . . . a novel that can be parsed like a sentence; it is that well made.” (The New York Times Book Review) About the Author David Markson’s novel Wittgenstein’s Mistress was acclaimed by David Foster Wallace as “pretty much the high point of experimental fiction in this country.” His other novels, including Reader’s Block, Springer’s Progress, and Vanishing Point, have expanded this high reputation. His novel The Ballad of Dingus Magee was made into the film Dirty Dingus Magee, which starred Frank Sinatra, and he is also the author of three crime novels. Born in Albany, New York, he lived in New York City until his death in 2010.Stephen Moore is an American author and literary critic.

⭐This is one of those books that can not and should not be written again, but in a good way. There. That’s the weird part. Basically, I’m into odd literature (probably got suggested this since the algorithm saw Infinite Jest in the history) and this is really unlike anything I’ve read before. So you have your narrator, typing away as the last woman on earth (the blurb on the back of the book makes it ambiguous but it’s more fun to just accept it as the truth), letting out her thoughts, the things that have come from years of solitude, on paper, paper being about the closest thing to someone listening that she can get. I guess the only thing I can say about it is…you get how she’s been alone with her thoughts for so long. You get the whole feeling of the internal world she’s created out of the shards of the world that used to be, or at least what she thinks she has preserved of it, and it all feels very human and personal throughout. Relatable, even, if you can honestly think about what you’d do in that situation. There are tons of references in there, yes, but no, you don’t have to know them. Sure, there are definitely layers going on here, as the essay by David Foster Wallace talks about, but you don’t need to know all of the references or even that many of them. It stands on its own without knowing much as long as you’re willing to keep reading and learn from what she says. Though there is a lot of thinking if you want to take a reading to its final conclusion- as in the aforementioned essay at the end of the book- you can also get a lot out of this with just feeling. I’ll stop at the “feeling and reading the essay at the end” level and be very happy with it.

⭐After getting through 1/3 of the book or so, I have decided that holding this book in my conscious experience gives me psychic damage. That’s not to say the book or its themes are “bad”, but the depiction of loneliness, madness, and an ab-initio human experience (?) feel like they rub off. This book does make me so grateful for human connection and my friends and having a normal time in my life. But I strongly dislike the psychological inertia that this book holds in my thoughts after I put it down… I will pick this book back up when my will is stronger, and perhaps ingest it in smaller doses.

⭐This book gave me a headache. An intellectual rant of no consequence. The copy I received had some lines of print dropped one font size, (to make it fit on the page? That gives away a formatting error the publisher couldn’t deal with) or maybe that was part of the experimental part of the novel where I maybe zoned out. Finishing it was agony.

⭐I absolutely loved this book. It was funny and also desperately sad. The way the narrator’s character is brought to life through the writing is just great. I can’t believe that a man wrote this from the perspective of a woman.

⭐Wow, this was amazing. Totally mind-blowing. An earth-shattering masterpiece.

⭐It’s rare I don’t finish a book I start. But it does happen. This book is drivel. A sequence of scrambled sentences, about ten or so topics, continuing for however many pages. If you read it all you might indeed find yourself in an altered state. And perhaps it does qualify as *art*. But it is definitely not a good book.

Previous article
The Shadow of the Wind (The Cemetery of Forgotten Book 1) by Carlos Ruiz Zafon (EPUB)
Next article
Sailor and Fiddler: Reflections of a 100-Year-Old Author by Herman Wouk (PDF)