In the Country of Last Things by Paul Auster (EPUB) 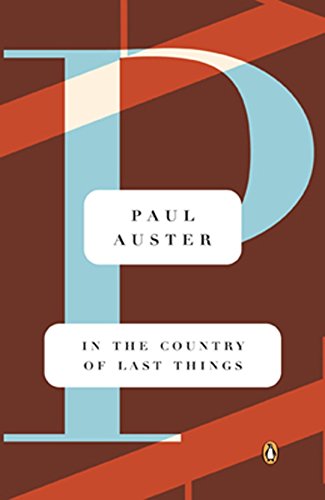 From the author of the forthcoming 4 3 2 1: A Novel – a spare, powerful, intensely visionary novel about the bare-bones conditions of survivalIn a distant and unsettling future, Anna Blume is on a mission in an unnamed city of chaos and disaster. Its destitute inhabitants scavenge garbage for food and shelter, no industry exists, and an elusive government provides nothing but corruption. Anna wades through the filth to find her long-lost brother, a one-time journalist who may or may not be alive.New York Times-bestselling author Paul Auster (The New York Trilogy) shows us a disturbing Hobbesian society in this dystopian, post-apocalyptic novel.

Editorial Reviews: Review Praise for In the Country of Last Things:“Powerful, enigmatic, imaginative, and handled with artistry. . .One of the better modern attempts at describing hell.” – The Washington Post Book World “Reminiscent in many ways of Orwell’s 1984. . .Auster creates within these pages a place so real it could be our own country, perhaps our very own city.” – The Atlanta Journal Constitution About the Author Paul Auster is the bestselling author of The New York Trilogy and many other critically acclaimed novels. He was awarded the Prince of Asturias Prize in 2006. His work has been translated into more than forty languages. He lives in Brooklyn, New York.

⭐Mr. Auster writes in a very readable fluent style. Although he describes many horrors, few are believable. Not because I, the reader, do not find my own memories of the death camps of WWII that my mother’s family experienced unbelieveable. It happened and my heart is in some deep way wounded by that knowledge. The “adventures” of the protagonist in this book are reported…but in a bloodless way. It is like reading an article in the NYT. Journalisism listing atrocities. I doubt I shall seek out his work again. The story he tells is so chock full of holes, absurdities, and the ending is not a cliff-hanger or a twist. It is more like he either lost steam or lost interest. The end.

⭐Auster creates for us a truly horrible reality; but a reality that is in fact imaginable. One where the central government is no longer in touch with the needs of the people, where local government is unable to raise enough money to keep basic services working and where each person `fends for themselves’ in the streets, where ever they can find what they need to stay alive.The description is beautifully constructed and while Auster never states this, the city has a feel of Manhattan, which would not be odd, as Auster lives in NYC and is intimately familiar with the City and all its nooks and crannies. But in this book, Auster leads the reader through the most terrible and heart rending human conditions; physical, emotional and psychological. And the descriptions of these pains are precise and concise.Auster uses his usual tremendous power with words to convey the depth of all the darkest of the dark. But he does make a point of stating that these people are Alive! This is not some type of “Hell” but if anything: Purgatory! Here on Earth!With truly artful metaphor, the story of Paul Auster is clear:Man will try to go on, not matter how horrible his surroundings, no matter how painful it is to continue to live; until he is just no longer able to do so.The book is high quality and uniquely created modern literature. It is an experience that all serious literary readers should not miss.

⭐Paul Auster presents us with yet another must-read. This novella takes place in an unnamed city that has suffered complete ruin. There is no consistent government to speak of and anarchy rules supreme. But, the fascinating premise is that this is not a world problem, this is a city problem. It is a land cutoff from the world, and the world seems to have forgotten about it. Sound familiar? (Keep in mind this book was first published in 1987.) However, newspapers are still trying to get the scoop on what’s going on, and so reporters are occasionally sent in, though most never return.One such reporter who never returned left behind a younger sister who has traveled to the country of last things in order to find him. From a privileged family, it takes her a surprisingly short amount of time to adapt to the horrific conditions under which she must survive. She is primarily the narrator of her story, and we follow her as she experiences tragedy, death, suffering, but also, as impossible as it may seem, love and hope.I’ve heard this book is about everything that can go wrong in a society and how it can leave the reader with a sense of despondency; however, I found the book to be a testament to the power of hope and love.To touch upon Auster’s style: I’ve read many of Auster’s books, and while he explores similar themes, I’ve never read two books that were written in the same manner. Auster gives us something fresh and artistically progressive with each book he writes. In the Country of Last Things is virtually a how-to for any budding writer as it uses sparse detail and very limited dialogue to completely drive home the potency of the theme.I’ve yet to read a book I did not like from Paul Auster, and In the Country of Last Things is certainly no exception.~Scott William Foley, author of

⭐Auster’s highly lyric and seemingly allegorical bit of fiction, where Anna Bloom searches for her brother in a city that seems to be all that is lost hides. Suicide cults, riots, and all small and large signs of decay abound–definitely an early work for Auster and has many of elements on expects from the 1970s and 80s, New Wave sci-fi authors, but Auster’s prose is so poetic that this seems to add something to the story in and of itself. I read this book about every 5 or 10 years and enjoy it anew.

⭐Paul Auster has set “In the Country of Last Things” in the bleakest imaginable place, a ruined city filled with starving, desperate people. What has brought about this end-of-days situation is never made clear. The protagonist, Anna Blume, formally had a rather spoiled life but has now begun a journey to find her missing brother, William. He was a journalist who came to the city to write a story, he hasn’t been heard of since. There is no real government, not enough food to go around and the very fabric of the city is crumbling away. At one point in the story Anna decides to travel by boat back to wherever it is she came from but is told that a huge sea wall is being constructed from all the derelict buildings. The wall will take at least fifty years to complete (I wonder if this is reference to the wall in Auster’s “The Music of Chance”). Anna is a delightful girl, loyal, courageous, selfless and loving. The relationships she forms with quirky souls along the way are very touching. I desperately wanted her to find her brother and live happily ever after. Through his descriptions of friendships and love Auster manages to make this story almost uplifting in places. If you enjoy this book I would recommend “Moon Palace” by the same author.

⭐Some of the reviewers here describe In the Country of Last Things as a realistic work. I disagree. This book is an allegory and aims at nothing else. But such is the force of Auster’s writing that the reader is prepared to suspend disbelief.It is a unique characteristic of the industrial world that none of us has a complete vision of how it works, and it is easy to imagine that what we don’t understand, let alone control, could suddenly cease to function; Auster plays on this basic fear to weave a morbid, often horrific tale.The heroine, in search of her brother, finds herself trapped in a city that we recognise as having once been 20th century American, but has now become a crucible of destitution, savagery, and violent struggle for survival. This grim novella describes a society which has ceased creating or even producing, and is thus reduced to consuming what is left… until that runs out. It holds a mirror to our own compulsory consumption, waste and greed, and it forces us to consider the actual value of modern material comfort. It also lets Auster exploit on a grander scale his pet themes of decay and degradation, of homelessness and its impact on identity.Post-modern decay apparently isn’t pretty. It is a place of book burners and ghouls, of cannibals and suicidal fanatics, of pathetic attachment to the most miserable objects, and of general disregard for human life and dignity, even if hope and love aren’t entirely missing. But it makes for a fascinating read, one that it is difficult to complete in anything but a single, mesmerising sitting.

⭐In the Country of Last Things is a stark & compelling vision of the future where a government’s only real contribution to society is ensuring the corpses are swept clear from the streets. This very fragile hold on the name of ‘authority’ is in a world where people scavenge for the tiniest morsels be it food or possessions. The scramble from murder & the harshly unpredictable weather is all documented in the present tense via diary entries by Anna who bases it all around a search for her lost brother. Her episodic reports powerfully convey the immediacy & urgency of flimsy institutions where vague structures struggle for permanancy. Above all, Auster’s unflincinhg, taut text finally delivers the blow of a futile narrative that is doomed to being an open ended suicide note. Hard hitting stuff.

⭐This book is a page turner which has real strong imagery. The reader feels like that they are really there , in this completely unknown place and Austers’ description of the characters provides real in-depth feelings and clarity of their persona. It is a thought provoking book which is excellently written. Easy to read although the theme is not pleasant, so in that case it is not light reading. Would recommend and would like to read more of his books.

Report from the Interior by Paul Auster (EPUB)

The Music of Chance by Paul Auster (EPUB)

The Book of Illusions: A Novel by Paul Auster (EPUB)

The Inner Life of Martin Frost: A Film by Paul Auster (EPUB)

Man in the Dark: A Novel by Paul Auster (EPUB)