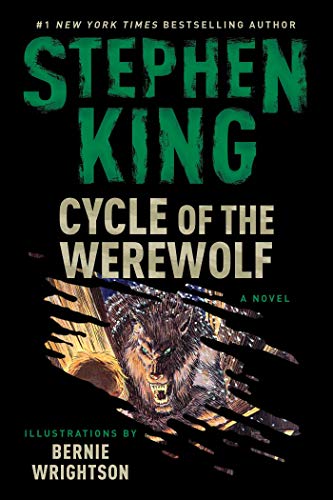 The classic masterpiece by #1 New York Times bestselling author Stephen King—illustrated by the legendary artist Bernie Wrightson!Terror began in January—by the light of the full moon… The first scream came from the snowbound railwayman who felt the werewolf’s fangs ripping at his throat. The next month there was a scream of ecstatic agony from the woman attacked in her cozy bedroom. Now scenes of unbelievable horror unfold each time the full moon shines on the isolated Maine town of Tarker’s Mills. No one knows who will be attacked next. But one thing is sure. When the full moon rises, a paralyzing fear sweeps through Tarker’s Mills. For snarls that sound like human words can be heard whining through the wind. And all around are the footprints of a monster whose hunger cannot be sated…

⭐As a Stephen King fan, I am hardly ever disappointed by his work. This graphic novel goes through each month of a year in the lives of the residents in the town. If you have seen silver bullet, take that out of your mind while reading this book. It was a good read, and it was quick. I needed to know what was going to happen next so I read it in one sitting. The illustrations are great and very detailed. I would recommed this book to any Stephen King fans.

⭐As is Stephen kings way you become a part of the story, you see and meet all of these people who live in the small sleepy town. You learn who the werewolf is and how he became one. Then you root for the hero who would challenge the werewolf who killed people monthly at the rise of the full moon. An enjoyable read that I found hard to set down so I could sleep

⭐Steven King always brings his A-game. The illustrations (by Bernie Wrightson) are captivating. The book is a fast read that starts out slow…and…then…April. This would make a great campfire read.

⭐Cycle Of The Werewolf is a fantastic Novelette, and my personal favorite werewolf story to read. Keep in mind though, this is indeed a novelette, so don’t expect it to be a long read.If you’ve never read ‘Cycle’ but instead seen the film ‘Silver Bullet’, which is based on this novelette, you will find a lot of differences. One of the biggest ones to me, is the relationship between Marty and his sister.The book is split up into months, acting as chapters, which gives it a nice variation in the weather, and over all mood of the characters. One of the most appealing aspects of this book, is the amazing artwork. Matter of fact, there’s so many illustrations, that it kind of feels like a text heavy graphic novel.The copy I received from Amazon arrived in perfect condition, and I would highly recommend this to anyone 18 and over.

⭐Great story featuring my favorite horror monster and incredible art a must read for Stephen king fans and anyone that liked one of the best werewolf movies silver bullet.

⭐I thought this was the inspiration for the movie “Silver Bullet” and I was correct! Basic storytelling at its finest, this book makes for a fast read. Great for bedtime!

⭐Glad I found this, an old fave of mine and didn’t know it was still around. Copy came in excellent condition, graphic illustrations were great and it’s a fun read.

⭐I have to say that I read this after watching Silver Bullet (2 or 300 times), so I will have to say that I was shocked how different this book is from the movie that’s based on it. I’m not talking subtle differences either, outside two concepts this book is totally different than the movie.That being said, I loved this book. Loved it. It only took me a few hours to read it, it’s very short. The art work is great in it, and King’s prose is on great display here. It’s an easy read, it’s a fun read, and it’s got some nice gore to it.Good werewolf books are few and far between. This is definitely worth checking out if you’re a fan of the genre.

⭐For the price this is an absolute rip off. Stupidly short, boring and predictable story with illistrstions that give away what’s going to happen before you have read the passage! Absolutely ridiculous. I’m a big fan of Kings but this is gimmicky and a con, best avoided.

⭐this book was a little different to other stephen king books i have purchased. i have the entire works of stephen king, yet this is nothing like his other books. it is short and illustrated and is really quite odd. the story is simple and follows the lives of various people through ever month of the year and it also follows the year long cycle of a werewolf. it was a great book, yet maybe only one for serious collectors, as it isnt a book that you can sit back and enjoy for an extended period of time, as you will most likely finish it within an hour.

⭐This is one of those Stephen King books that isn’t always readily available. Unless of course you are willing to pay an unfair price on auction sites.I’m a big Stephen King fan and I am glad to have finally read this one. It is not one of his best works but still enjoyable. The illustrations are really just there to pad out the book (in my opinion) and are completely unnecessary, but on the other hand King likes to do things differently. He split one of his books up and sold it in parts (Green Mile) he wrote a story strictly for the internet (Ride the Bullet) he is currently involved in transferring his Dark Tower books into comic books so he probably had a hand in this.My only real problem with the illustrations is that they served as spoilers to the storyline. But it was a basic werewolf storyline anyway so probably a tad predictable.The film Silver Bullet was based on this book, but it’s not really a straight take on the book, just someone taking liberties so if you’ve seen the film, expect to read a different story.

⭐I had been after this book for a while as I am a huge fan of both Stephen King and the artist Bernie Wrightson I was disappointed by the page count (there are twelve chapters one for each month of the year) the story itself is about a town where a series of grisly murders take place and of a young boy in a wheelchair who knows the truth. As for the illustrations they are beautiful but gory typical Wrightson…..all in all a cracking read but do not look at the illustrations first as they give away the identity of the werewolf…..shame it’s so short and not cheap!!