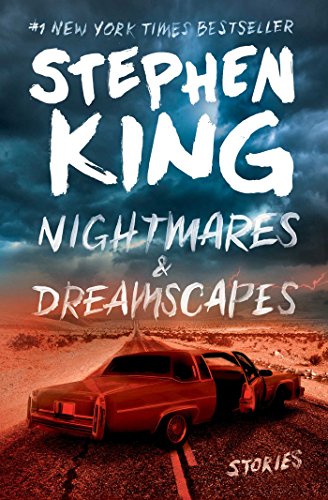 Includes the story “It Grows on You”—set in the fictional town of Castle Rock, Maine The classic short story collection from #1 New York Times bestselling author Stephen King.A wrong turn on a lonely road lands a wayward couple in Rock and Roll Heaven, Oregon, where there’s no escaping the free nightly concert….A novelty toy becomes an unexpected and terrifying instrument of self-defense….An ex-con pieces together a map to unearth a stolen million dollars—but at what price?…A private investigator in Depression-era Los Angeles is finding his life unraveling as he discovers the shocking truth of who he really is….A third-grade teacher is willing to dig deep in order to exact revenge for his murdered wife…. These are just some of the haunting scenarios to be found in this classic collection—spellbinding tales from the darkest places and the unparalleled imagination of fiction’s master storyteller. Stories include: -Dolan’s Cadillac -The End of the Whole Mess -Suffer the Little Children -The Night Flier -Popsy -It Grows on You -Chattery Teeth -Dedication -The Moving Finger -Sneakers -You Know They Got a Hell of a Band -Home Delivery -Rainy Season -My Pretty Pony -Sorry, Right Number -The Ten O’Clock People -Crouch End -The House on Maple Street -The Fifth Quarter -The Doctor’s Case -Umney’s Last Case -Head Down -Brooklyn August

⭐Once again, the gift Stephen King was given at this time in his life, is phenomenally appreciated. Only a couple stories did I skip, for I lost interest from the start, but it didn’t take away from the enjoyment this collection of stories brought me. Even if Mr. King never writes another novel or collection of short stories, his legacy will continue for years to come. Kudos!

⭐I guess it’s me, getting older, but when I was a teen, Stephen King stories were some SCARY stuff. I loved Night Shift, The Shining, The Stand… but sometime along the way, the thrill was lost and King seemed to churn out things just for the paycheck. Not that there’s anything wrong with that- God bless the crazy prog loon- the guy can WRITE, but “Cell” was awful. “Under The Dome”? Ugh.I bought this collection because it had “Home Delivery” in it, and I worked through a few of the other stories, such as “Chattery Teeth” (animated Chattery wind-up teeth with a will of their own!) and “The Moving Finger” (there’s a looooong finger that pokes out of a guy’s sink drain) and I said to myself “I’m bored.” KIng is successful and that lets him write whatever the heck he wants, secure in the knowledge that he has a dedicated market. Who’s gonna tell the man “hey, your story is really 5000 words longer than it needs to be. Maybe pare it down some? Make it punchier?”No one.It’s Stephen F King. No one tells him how to write.So if you know his style, and like his style, you’ll enjoy this collection. If you did a lot of growing up between reading some of his books, maybe these will help you sleep.If you want to get scared by something Stephen King did, maybe check out the movie “Salem’s Lot” and wait for the scene where that little vampire kid is floating around the other kid’s window, trying to get in.

⭐Another excellent collection of short stories by Stephen King! Some of my favorites:Home Delivery: A zombie tale that takes place on a Maine island community.The Ten O’Clock People: A handful of smokers seeing creatures who have taken over the bodies of people in high places of commerce and government.Crouch End: An American couple get lost in a London suburb and encounter creatures and other mysterious things.

⭐I love it. I always enjoy his books. I will admit I didn’t care for the baseball ones. I am not a baseball fan. I did read them. The rest of the stories made up for it.

⭐Great collection of short stories by the master of horror

⭐Not King’s best short fiction volume (That’s “Night Shift”) — but totally worth the read. Classic King.As always, I find his short reads stronger than his sprawling novels. This is not literary stuff, but it’s deeply satisfying: for me the volume is cranked up, everything is zoomed into tiny but exaggerated details, neon colors, ultra-American, televised, advertised, supersized, melodramatic, manic, stylish, low-brow, iconic and addictive.Some top stories: Dolan’s Cadillac and Chattery Teeth (both set in the desert instead of Maine), The Moving Finger and Sneakers (trashy, insane, superb; intensely “of their time”), and The House on Maple Street and The End of the Whole Mess (with great sci-fi twists).Stephen King doesn’t need any help selling books, but I say buy it!

⭐I love this book! I bought it when it was first published and lost it when our home burned to the ground. I was delighted to find the Kindle version on Amazon and enjoyed reading it all over again. Some of the stories are so cool! If you haven’t read it, this would be a good time to do so.

⭐It’s Stephen King, it’s short stories. What else is there to say. You either love it or hate there really is no happy medium. Me I love everything Mr. King does.

⭐Kindle version 898 pages.Similar to Night Shift, Skeleton Crew – many short stories (approx. 20).Differs from Four Past Midnight and Different Seasons – they have fewer but longer stories.The notes section describes King’s inspiration for each story and is interesting.Readers will find a favourite story, mine was Dolan’s Cadillac.King writes great short stories but this collection doesn’t seem to have many stand out stories (compared to other collections).Worth reading if you are a fan.If new to King and short stories, Different Seasons is highly recommended first as it contains the classic, Rita Haywood and the Shawshank Redemption.

⭐Whilst this was quite good with some interesting stories, I have to say that I didn’t find it as compelling as some of his other short story compilations. A lot of the material in this book almost felt “Experimental”, and a few of the stories left me somewhat underwhelmed. One or two classics in the mix, but not enough to make this volume anything special for me.

⭐A great collection of very bizarre, surreal stories. I think my favourites were popsy, the moving finger and umney’s last case (took a while to figure that story out!). I really wasn’t keen on ‘head down’, the baseball story. I know King is a huge baseball fan but it’s really not that interesting to me and I had to skip it (the first time I’ve ever done that with a Stephen King book). The other stories more than made up for it though. A good read!

⭐There are as me real gems in here (bat people, tapping finger, rock and roll hell) but there are plenty of rubbish ones to sift through that show King at his laziest; bland horror, writers from Maine by the dozen, predictable twists.

⭐I like Stephen King, and I’ve liked his previous anthologies. This one didn’t really hit the spot in quite the same way. Some of the stories are good though. “You Know They Have a Hell Of a Band”, and “Rainy Season” are two of my personal favorites. It’s okay for dipping into, but don’t expect to be scared.