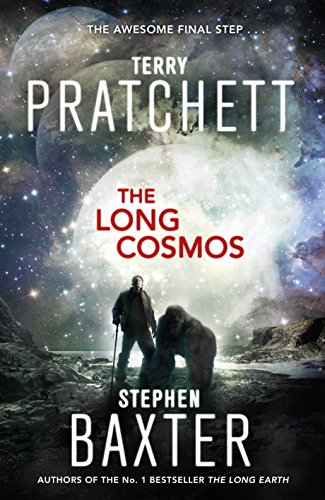 2070-71. Nearly six decades after Step Day and in the Long Earth, the new Next post-human society continues to evolve.

For Joshua Valienté, now in his late sixties, it is time to take one last solo journey into the High Meggers: an adventure that turns into a disaster. Alone and facing death, his only hope of salvation lies with a group of trolls. But as Joshua confronts his mortality, the Long Earth receives a signal from the stars. A signal that is picked up by radio astronomers but also in more abstract ways – by the trolls and by the Great Traversers. Its message is simple but its implications are enormous:

The super-smart Next realise that the Message contains instructions on how to develop an immense artificial intelligence but to build it they have to seek help from throughout the industrious worlds of mankind. Bit by bit, byte by byte, they assemble a computer the size of a continent – a device that will alter the Long Earth’s place within the cosmos and reveal the ultimate, life-affirming goal of those who sent the Message. Its impact will be felt by and resonate with all – mankind and other species, young and old, communities and individuals – who inhabit the Long Earths…

⭐ I dare say I was a bit disappointed by this novel, presumably the last in the Long Earth series.This book picks up a couple of decades after the last novel and as such all of our favorite characters are much older and a bit more jaded than they were before. There is talk of a new expedition interleaved with some kind of “message” that people up and down the Long Earth are receiving, but it’s frankly never explorer to my satisfaction. I just felt the book was more filler than substance, and perhaps fleshed out in large from by Stephen Baxter.This is an okay book and if you’re a fan of seeing how the series wraps up it’s worth getting. It’s simply not as interesting or as filled with “new ideas” as the previous books were. I don’t really see how there will any more in the series unless they pick up the pace a bit, but we’ll see.

⭐ I am a huge fan of Terry Pratchett’s writing and have devoured the “Long Earth” series as soon as each book came out. For perfectly understandable reasons, this was perhaps the least satisfying of the series, and had Pratchett lived to see the final product, I feel it might have had more like the same impact as the earlier episodes; as it is, Baxter did a reasonable job but unlike before, it reads like it was written by two people alternating segments but not with a cohesive vision in mind for the denouement. I really hope Baxter feels up to continuing the series on his own or with another collaborator, as I feel really invested in the worlds he and Pratchett created so wonderfully together, but this episode left me less than satisfied.

⭐ This is the final book in the Long Earth series. This series is unique, well-written, and a good mixture of fun, drama, adventure, and humor. It must be considered an instant classic. This final book is a worthy finale bringing the series to its logical conclusion.The book starts with the receipt of a message to come and “JOIN US”. This message is received by all sentients in the Long Earth including humans, the Next, and trolls. The Next also used other electromagnetic detectors to obtain the entire text of the message and determined it was a set of instructions for building some kind of thinking machine. The Next then debated whether to build it. Would contact with advanced aliens lead to the annihilation or to the enlightenment of humanity.The main focus of the book is on Joshua Valiente, but we also meet a slew of characters from the previous books in the series including Lobsang, Sister Agnes, Nelson Azikiwe, Roberta Golding, and Maggie Kauffman.

⭐ This is the climax of the “Long Earth” series conceived of by Pratchett, revived in a dinner conversation with Baxter, and collaborated on by the two of them. The opening conceit of the series is that there are an, apparently, infinite number of Earths which can be reached by “stepping,” and humans evolved only on this one, the Datum Earth. So if you stepped in either direction (“East” and “West”), you would find, at first, primeval forest. Things got weirder the farther you got from the Datum.(Iron is the only element that cannot cross between Earths. Pratchett and Baxter never explain how human hemoglobin isn’t destroyed the first time a human “steps”…)Things also got weirder as the series went along. Previous volumes have introduced a wide cast of characters, most of whom appear in _Cosmos_. _The Long Earth_ introduced the original “stepping box,” powered by a potato. In _The Long War_, trade by airships capable of stepping becomes commonplace, and human colonies begin to declare their independence from the Datum. _The Long Mars_ introduced a second string of worlds, independent of the Long Earth; and also introduced the Next, our successors. And _The Long Utopia_ is mostly about the relationships between the Next and the “Dimbulbs,” plus bonus! dangerous alien machines._Cosmos_ begins with the nearly-universal receipt of a message from space: JOIN US. The superintelligent Next begin working on decoding the technical content of the message, while humans, trolls, and beagles (a race of humanoid, intelligent dogs from millions of Earths out) are caught up in the debate over whether it’s even good to answer the message, particularly in light of what happened in _Utopia_.Meanwhile, the series’ main characters, Joshua and Nelson, both find themselves unexpectedly grandfathers – Nelson in a mysterious communication from the AI Lobsang, and Joshua when his estranged son Rod comes to rescue him from a distant Earth where he has been gravely wounded. Before all is wrapped up, something comes to be known of the nature and purpose of the Long Earth, and humans travel to the stars.It’s all good fun, and if it isn’t as full of ha-ha as Pratchett’s solo books (or his collaboration with Neil Gaiman, _Good Omens_…), it’s lighter than most of Baxter’s solo work. I’m delighted to say that the series maintains its quality throughout, and ends on a high note.

⭐ The Long Cosmos (The Long Earth, #5) by Terry Pratchett and Stephen BaxterHow do you say goodbye? Especially to a beloved author who is now in the next realm. Sir Terry Pratchett, (who had numerous works to his name) left us in 2015. Happily he and Stephen Baxter left us this very satisfying, and yet bittersweet conclusion tho the series.I would decidedly recommend that you do read the entire series, in order, before this. Otherwise, you simply won’t get the full emotional impact of the book.Our old, dear friends have one last tourney to make, and hopefully answer an invitation to all sentient beings in the Long Earth cascade. How they do what they do, and the interaction of these people are what keeps this book so close to the heart.So, in the wise words of Dr. Seuss, “Don’t cry because it’s over, be happy that it happened!”

⭐ Am incredible step for the humans oh the stepping generations. Many worlds were visited in the long earth. Past relationships were revisited. Family has new styles and choices. Yet, the family bond exists and was reawakened and better understood.There is much time spent with a band of trolls. There skills and values were more diverse than previously assumed. Much to learn.The main point is the receipt of a message from space and our solar systems response leads to greater understanding of sapient creatures who share the long earth. The response to the call is amazing .To get the details of what has been shared, enjoy reading this book from an incredible author.

⭐ I love this concept.What if you could step to another analog of your local Earth, but couldn’t take much in the way of technology with you, then step again, and again … That is the ‘what if’ principle upon which The Long Earth was written.In The Long Cosmos, several characters from the original novels get together again some years later. They (everyone, that is; trolls, humans, ‘Next’ – post-humans) receive the invitation: ‘Join Us’. With overtones of Sagan’s ‘Contact’, the Next have decoded blueprints for a device (as big as a State) to make it possible for ??? to happen. But (since both Baxter and Pratchett are writers of people rather than about tech), a small craft is constructed for a few key (and familiar) characters to take a reconnaissance tour.The writing owes more to Baxter than to Pratchett, but there are a few nice touches in Joshua and Lobsang’s repartee. A couple of nice back stories to the main idea are developed. Why a bunch of sixty-year-olds (one a cripple) is vital to the mission when there are planets full of able-bodied Navy types available is never really explained. And there is plenty of room for a ‘what next?’ that will never be realized. But all-in-all a good read for those with a healthy suspension of disbelief.

⭐ A great finish to the Long Earth series. I’ll buy anything that Stephen Baxter writes, and a partnership between him and Terry Pratchett? How could you say no to that?This book appropriately completes the saga of the Long Earth, tying up a bunch of loose ends (but not all!). The big thing that you’ll get out of this book is this: the world that they create is so plausible that you’ll feel convinced that it *has* to be true. It’ll give you a lot to think about. Enjoy!

⭐ The Long cosmos wraps up a lot of loose ends, but also leaves a few untied up. It’s a good ending to the series, but there’s enough left hanging that it doesn’t answer that it doesn’t really feel conclusive, so much as wrapped up as best it can be. That said, good story and enjoyable for the vision of the multiple Earths and the characters.

⭐ I wish these Long Earth books felt more like Terry Pratchett books to me, but they really don’t. Regardless, I did enjoy each book in the series and I found this one to be a nice bookend, should it prove to really be the final adventure through the step-wise universe. And Sancho was great – probably my favorite character in the book. Wise, curmudgeonly, not especially active…reminds me of the librarian.

The Science of Discworld: A Novel by Terry Pratchett (MOBI)

The Last Continent: A Novel of Discworld by Terry Pratchett (MOBI)

Lords and Ladies: A Novel of Discworld by Terry Pratchett (MOBI)

Moving Pictures: A Novel of Discworld by Terry Pratchett (MOBI)

Thief of Time: A Novel of Discworld by Terry Pratchett (MOBI)

Monstrous Regiment: A Novel of Discworld by Terry Pratchett (MOBI)

The Color of Magic: A Novel of Discworld by Terry Pratchett (MOBI)

Going Postal: A Novel of Discworld by Terry Pratchett (MOBI)

Hogfather: A Novel of Discworld by Terry Pratchett (MOBI)