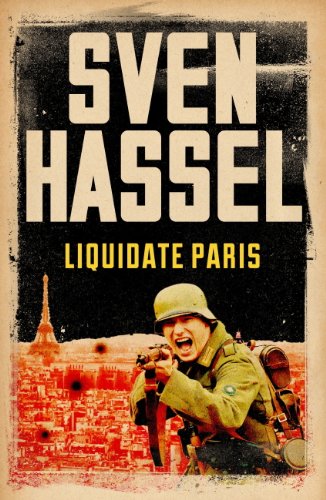 I had a grenade in my hand. So, no doubt, did the English private. I tore out the pin with my teeth. Lay there and counted. Twenty-one, twenty-two, twenty-three, twenty-four…

It is Hitler’s last chance to save the Third Reich…

Millions of Allied troops have landed in Normandy.

The orders are clear: Sven and his comrades, hardened by a savage war that has led them from the bloody steppes of the Russian Front, to the slopes of Monte Cassino, are ordered to withdraw to Strasbourg and destroy Paris on the way…

Review Hassel’s books of war are the most powerful I have ever readHe is graphic, at times brilliantly so, but never brutal or bitter. He is, too, a first-rate storyteller―WASHINGTON POSTIn essence this is an expose of the absurdity of war, and a moving plea for peace. As such, it takes its rank with far milder books, such as ALL QUIET ON THE WESTER FRONT―NEWSDAY –This text refers to the paperback edition.

⭐ Sven Hassel wrote one non-fiction book, his autobiography of his time in the German army in the east and in allied custody after WW II. All his other books are fiction, most are pretty good but not what I’d call great literature. Most are fairly exciting, as Liquidate Paris is. Liquidate Paris is a little different from most of the others I’ve read as it was originally in French and is translated from French into English. One of the regular cast of characters has a different name in this book. Tiny is Little John in this book, I don’t care for that change but it’s OK I guess. His character, Tiny, isn’t as well developed in this book. Still it neither his best nor his worst book.Sven Hassel’s books are sort of like pulp fiction western novels set in WW II Germany, Russia, France, etc with the Wehrmacht instead of cowboys. It is interesting, very interesting actually to read war stories written from this POV. I would recommend this book along with most of his other books. Comrades of War was my least favorite so far. It is almost all written “on leave” and mostly in brothels, it gets old. The other books that are set in Russia are pretty good. I am reading my way through all his books so I guess there is something I like about them, I think you will too. Hassel’s books don’t try to sanitize the horror of war like so many western or American books do… I think that is good.

⭐ This is the seventh book written by Sven Hassel, all of them portraying the German characters from the 27th Panzer Regiment, 5th company, 2nd Section. In this book, they are all here: Old Man (Willi Beier), Joseph Porta, Tiny (Wolfgang Creutzfeldt), Sven, Legionnaire (Alfred Kalb), Barcelona Blom, Gregor Martin and Julius Heide. The “guest stars” are company commander Lowe and fellow soldier Gunther (this one never to appear again, Lowe to be killed in “Reign of Hell”).As a brief search in the Internet will inform you, there are controversies about who was Sven Hassel or even who wrote his books (there are 14 of them). Indeed, the general atmosphere and writing style differs so much from book to book that it sometimes seems each one was written by a different person! Anyway, what is important is they are good, entertaining, sometimes vulgar, sometimes tear-jerking, sometimes extremely funny books.LIQUIDATE PARIS has fewer combat sequences than other books, but even so is a generally good entry in the catalogue. If you read one of the other books and liked it, you’ll like this one.

⭐ I won’t lie, I love Sven Hassel’s books. The reality, brutality, insanity of war. He provides a twisted anti-war view of the Second World War.Maybe all his books are not truly biographic, but either way, they are entertaining.

⭐ I love this series! Reader should bear in mind author is Dutch, writing in German, book was translated into French and THEN into English. Series does for the Army what “Das Boot” does for their Navy.

⭐ So glad these books are still around, read most of the series when I was a teenager (45 years ago)

⭐ Sven is simply awesome. I had a few laughs reading this one. You never disappoint. Onto the next one, Sven!

⭐ Sven Hassel is my favorite WW II Novelist. Sven writes form the perspective and daily life of the German Soldier under Hitler’s terrible reign. His story sparkles with characters like Porta and his mates, that was assigned to this company because it was a Punishment Company for soldiers who disagreed with the Fuehrers Army rules. Sven was himself inducted into the German Army, even though he was Swedish. All of his books, such as Wheels of Terror are excellent reads for anyone , especially for lovers of Military and war novels.