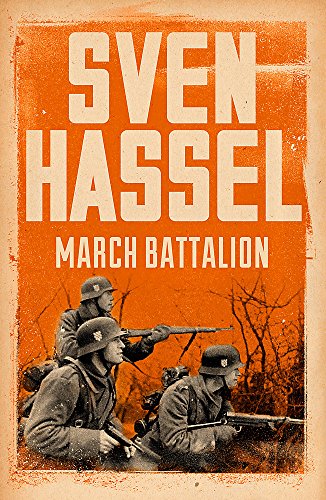 Sven Hassel and his comrades are once more hurled into the ferocity of the frontline.

The Eastern Front is a sight of unprecedented destruction. The soldiers there – the tank battalions of Hitler’s penal regiments – are considered expendable by the German high command.

This is a gripping testament to the soldiers sacrificed on the Russian Front.

Review Hassel’s books of war are the most powerful I have ever readHe is graphic, at times brilliantly so, but never brutal or bitter. He is, too, a first rate storyteller―WASHINGTON POSTIn essence this is an expose of the absurdity of war, and a moving plea for peace. As such, it takes its rank with far milder books, such as ALL QUIET ON THE WESTERN FRONT―NEWSDAYSven Hassel is one of the best European novelists around, with a flair for excitement that has few equals―STAFFORDSHIRE EVENING STANDARD

⭐ A dark read of the war from a German penal battalion perspective. Harsh reality, alcohol, war cruelty, weird dark comic moments. Ran across Hassel’s stories in the 70s in England, where they were still reliving the war in literature. Loved it then and now digitally.

⭐ Good book with all the trademarks of the series. I would recommend for someone new to the adventures of Sven, Porta, Tiny, the old man and the rest start with either Legion of the Damned or Wheels of Terror. But for fans it’s a good one.

⭐ I finally ordered MARCH BATTALION from Amazon and after many years read this final novel of Sven, Porta, Tiny, The Legionnaire and the rest of the 27th (penal) Panzer Regiment in World War 2. It is not as good as most of the other Hassel novels in the series but any writing by Hassel is a gem. Highly recommended to children everywhere.

⭐ Well, if you already had all other Seven Hassel’s books and only takes this one to read them all, then go for it, it won’t hurt.But be advised: this is his worst book (along with “The Commissar”). Totally cheap and unimaginative.

⭐ There is a big flap about Sven Hassel’s books in the military history/militaria sectors. Some believe the authornever went through what he describes , that it is fiction wrapped around aggregate bits of “Front Soldat”WWIi history. It works best on the latter premise, What the real Sven Hassel did or did not do has gone to thegrave with him. Good war vignettes, sometimes some interesting plot lines. In the same school as theGunner Asch series by Hans Helmut Kirst. Read one of these if you do not wish to go through the exhaustingtask of reading “Cross of Iron”(Heinrich). There’s an air of the 1950s swashbuckler/euro war adventure/traumascene for sure.

⭐ As with all Sven Hassel books the reader gets his money’s worth – IF the reader knows what he is purchasing! By this I mean captivating and pleasurable reading (somewhat an oxymoron as all the books are about war time “experiences”).Those seeking true biographical accounts of WW II or historically correct reading will have to look elsewhere though. The author’s “autobiographical” series of books is (very) obviously fictional and it shows easily enough to anyone with a rudimentary knowledge of history, geography and a sprinkling of common sense. I do not refer to this book only as it is appropriate for all the author’s books.On the other hand I wish to stress that I have enjoyed reading most of Hassel’s books and although fictional the descriptions of war time circumstances and the rather raw and gory “experiences” are very close to the real truth. I will go as far as to say that these books should be read by anyone who thinks of warfare as a honour and glory affair. It would help them get in touch with the reality of war.To summarize, we have a series of books providing for enjoyable reading if realistic stories of war time insanity is your cup of tea. The only thing that spoils it for me is the author’s insistence of trying to pass off fiction as autobiographical documentation. It is really very good fiction so why not leave it at that?