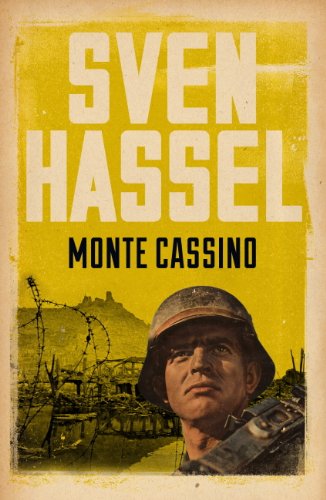 Having survived the horrors of the Eastern Front, the 27th Penal Regiment are posted to Italy. Hitler has ordered that every position must be held to the last, and every lost position recaptured by counter-attack.

Monte Cassino – a major look-out post on the German defensive line – is under attack. In the face of overwhelming Allied firepower, Sven Hassel and his comrades are ordered to hold the fortress at all costs…

Sven Hassel based his unflinching narrative on his experiences in the German army. He ended the Second World War in a prisoner of war camp, where he wrote his first novel LEGION OF THE DAMNED.

Review Hassel’s books of war are the most powerful I have ever readHe is graphic, at times brilliantly so, but never brutal or bitter. He is, too, a first-rate storyteller―WASHINGTON POSTIn essence this is an expose of the absurdity of war, and a moving plea for peace. As such, it takes its rank with far milder books, such as ALL QUIET ON THE WESTERN FRONT―NEWSDAY –This text refers to an alternate kindle_edition edition.

⭐ I’ve been working my through Hassel’s books and this was one of the more enjoyable entries in the series, with a bit more action than some of the previous books. However I am subtracting a star for the more fabulist elements of the book (Marines with Katanas for example) which distract from the narrative. Otherwise highly recommended.

⭐ In 1978 I was on liberty in London and I bought the entire Seven Hassel collection. I have since lost or given them all away. I can read his books over and over again. The part about the U.S. Marines is untrue but other then that his books give a good feel of what it was like to be a German solder in WW II.

⭐ A good read. A bit graphic but… it is a novel written by soldier who was in a Wehrmacht Penal Panzer unit, from the losers POV, which is always more valuable that the POV of the winner, which is usually twisted into fiction.

⭐ It is a story of young comrades, with both tough and funny moments of the war. I have been an admirer of Sven’s writing style.

⭐ Read them all 30 years ago still a good read now

⭐ Good gritty WWII novel about Monte Cassino. While does not cover entire battle gives good sense of the WWI type of fighting.