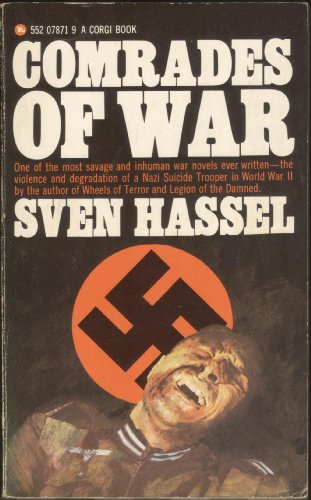 ⭐ This book, like all of the Sven Hassel books, is only loosely based on what could and did actually happen in World War 2. The books contain numerous technical errors. For instance, I don’t know what Hassel thought a “Kalashnikov” was, but that weapon was produced 2 years after WW2 ended, yet it is featured in virtually all of Hassel’s books. So, despite the lack of historical accuracy, and often odd translations, his books are very entertaining. Just don’t use them as reference materials for term papers on the German Army in WW2.

⭐ I have read several Sven Hassel books. They all share the gritty, sad, no holds barred descriptions of the lives and times of a group of misfit German soldiers at various stages of WWII.The books seem to loosely follow real events, but I do not believe that they were ever intended to be read as accounts or descriptions of events with historical accuracy.These books are are always gritty, often sad, always shocking. This one is no different. What makes this one stand out, is that there is much more development of the individual characters and their hopes, loves and generally bitter disappointments due to the war. But note, this is no a love story. Don’t let my description turn you away. There is just a little more of the better side of humanity in this book, than in many other Sven Hassel books.Sven Hassel’s books are sometimes a little disjointed (possibly as a result of the translation to English), and often they seem to just be excerpts of a period in the lives of his main protagonists. This one flows better than most, but there is still no obvious conclusion or indeed even introduction. The book starts in the war, and ends in the war.The descriptions are often bloody, gory and shocking. These books are confronting, and often make you question humanity and our ability to willingly inflict suffering upon other humans. But this is what we have done, and reading about it should be mandatory so as to make everyone aware how basic humanity can be at the lowest common denominator.

⭐ Sven Hassel has a shaded history but he gives a view of WW2 that you cannot find in many places. It is good for the reading for entertainment but it is better for the reading to get a sense of the atmosphere of WW2 from the side of one German soldier.

⭐ Ah, my old friend Sven. As mentioned before, there is a flap about him and his books in certain militaryhistory/militaria circles: That it is all made up, or at most bits of true “Front Soldat” stories interwound withgood vignettes and some good plot meanderings. A quick, bracing read. Has that 1950s swashbuckler/war trauma/ euro merc flavor. Appreciate the Front Soldat vignettes. What Sven did or did not do wentto his grave w/him.

⭐ This book I wouldn’t recommend. It is really pretty boring. I can only stay interested in accounts of getting drunk and debauchery with prostitutes for so long. There is WAY too much of it in this book. His other books are OK though.

⭐ Read this book (and the series) about 35 years ago. Thought a revisit with a digital version would be worth it – and it was! Better than I remember.Pulls no punches and puts you right into the horror of total war and the viciousness and sureal madness of Germany living under the nazi jackboot, from an ordinary soldiers perspective.

⭐ One of the best in the series.

⭐ To all reviewers beloew: this book is everything BUT historically accurate.I can’t believe that, with the Internet available to anyone, you have not yet discovered that Sven Hassel NEVER fouight in World War II, never went to Russia, never fired a gun!He was a Danish Gestapo-informer named Borge Villy Redsted Pedersen. It’s all fake, even LEGION OF THE DAMNED is fake.However, the merit in his books are the humor, the anti-belic statements, their anti-heroes.

I had a grenade in my hand. So, no doubt, did the English private. I tore out the pin with my teeth. Lay there and counted. Twenty-one, twenty-two, twenty-three, twenty-four...
Read more
Previous article
MONTE CASSINO: Nederlandse editie (Sven Hassel Serie over de Tweede Wereldoorlog) (Dutch Edition) by Sven Hassel (Epub)
Next article
Terminal (A Medical Thriller) by Robin Cook (Epub)