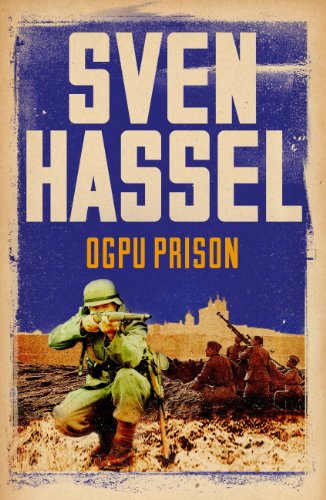 The Russian uses his machine pistol like a scythe. Feldwebel remains standing for a fraction of a second. The rain of bullets pours into him, making him twitch violently. He falls to the floor. The Russian grins. There is no doubt that he is enjoying himself.

Sven Hassel and his comrades are ordered to take O.G.P.U. Prison in any way they can, even if it means killing the Russians with their bare hands.

Armed with flame-throwers and heavy artillery, the 27th Penal Regiment plan their attack.

O.G.P.U. PRISON is one of Sven Hassel’s most compulsively readable novels, full of battle scenes, written in the gritty style that Hassel is renowned for.

⭐ Firstly, I have been a fan of Mr. Sven Hassel for many years. All of his novels revolve around a group of German soldiers going through the trials and tribulations of WWII. The main characters are part of a unit of the German army that are from punishment units. That is to say the characters are criminals and without a whole lot of boundaries. His series of novels deal with various battles these soldiers find themselves in. And of course being a penal unit, they seem to get handed the most undesirable jobs.The characters are well developed and all have their own unique personalities. Along with the horrors of war described in graphic detail, there is also interaction within the characters that is sometimes horrific and comical.This book is a graphic look at how this unit of misfits deals with the subject of OGPU prison and to tell you more would ruin the book for the reader. Mr. Hassel was a part of this unit during WWII and provides a first hand look at the lives of these men. I highly recommend these books, the drama, comedy, and the horrors of war are reflected to enhance the readers interest and to learn first hand the horror that war can be for both sides.

⭐ I have read all of seven’s books. They are mostly enter changeable. The party stories go on for ever, but that is just his style. These books are ultra brutal, but that was the way it was I WWII. In the 70’s Seven’s books were not allowed in the US, due to the brutality. I like to read them as a departure from the non-fiction that I usually read. I didn’t know Seven died in 2012. That is sad. If your readers don’t know Seven actually served in a German pineal battalion during WWII. He brought his expectancies to his book. That’s why I love his books.

⭐ Typical Sven Hassel. A good read. Violence, gore, sex, betrayal set in the Wermacht penal battalions in Germany and the Eastern Front with the plot focusing on caught in the meatgrinder of combat.

⭐ A real classic – one of the best in this genre.

⭐ This book is another successful one from Sven Hassels series and it is really exciting to read. I recommend it