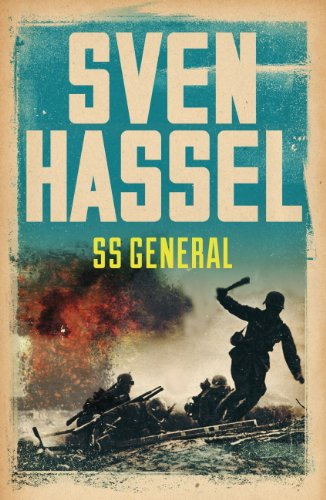 It was said that Stalingrad had been burning since August, ever since the first German bombs were dropped…

Sven Hassel and his comrades are plunged into the maelstrom of Stalingrad.

Radio Moscow reports that one German soldier dies every minute.

Trapped by the Russian counter-attack, starving soldiers must resort to cannibalism to survive. But ‘Tiny’, Porta, the Legionnaire and Sven attempt to break out, to fight their way across the frozen steppe.

Their leader: an SS general who takes no prisoners…

Review Hassel’s books of war are the most powerful I have ever readIn essence this is an expose of the absurdity of war, and a moving plea for peace. As such, it takes its rank with far milder books, such as ALL QUIET ON THE WESTERN FRONT―NEWSDAYThe story shudders from page to page while the devoted friends live precariously from year to year, until only the one survivor is left to write this book. And a gripping book it is―CHICAGO SUNDAY TRIBUNE –This text refers to the paperback edition.

⭐ This is so far the best book I have read by Sven. I am close to say that it was as good as “Forgotten Soldier” by Sajer. It was an emotional ride at times. I read it during the Polar Vortex comfy in my home. I can’t simply imagine staying in this cold air more than a few necessary minutes. These guys took on General Moroz daily. There are minor annouyances, such as Tigers at the time of Stalingrad, but it is all forgiven because the story was just toooo good. Great work by Mr Hassel.

⭐ If you have read any of Hassel’s previous novels, this one isn’t any different. After having read six or so, they all start to blur together.

⭐ one of his best

⭐ This book is everything BUT historically accurate.I can’t believe that, with the Internet available to anyone, you have not yet discovered that Sven Hassel NEVER fought in any battle ofWorld War II, never went to Russia, never fired a gun!He was a Danish Gestapo-informer named Borge Villy Redsted Pedersen. It’s all fake, even LEGION OF THE DAMNED is fake.However, the merit in his books are the humor, the anti-belic statements, their anti-heroes.

⭐ Sven Hassel’s novel “SS General” exposes the hideous brutality that was the Second World War. In this book, as in most of his other novels, he writes history as fiction. He is the protagonist of his own works. He sees friends and enemies die in the cauldrons of Stalingrad, Normandy, and Monte Cassino. In SS General, Hassel and his companions are led out of Stalingrad by a renegade SS general, who succeeds in doing exactly that and is executed by a firing squad for having ‘abandoned’ his post. Hassel also spends considerable time in portraying the murderous antics of a true-life Nazi, Theodore Eicke, who graduated from the ranks of being a concentration camp commandant to that of a SS field general who was given carte blanche by the Fuhrer to execute anyone he pleased. Hassel somehow survives the frozen snows of Stalingrad and the itchy palms of the German field police who executed nearly as many front line soldiers as were killed by the Russians. “SS General” is probably the best in the series of nightmares that Sven Hassel nightly relives. As you read his books, you learn that suffering has a purpose–to prepare for further outrages on your soul. No one tells this message as well as he does.

⭐ Sven Hassel and his comrades Barcelona, the old man, Porta, Tiny, and the little legionaire are trapped at Stalingrad with the Russian army surrounding them. They have no food, no winter clothing, no medicine, and no tranportation. All they have is a crazy S.S. General named Augsbergh, who has to have read about Xenophon because he has them do a desperate forced march through the Steppe to make it back to their lines all the while facing down the Russian army and the merciless Russian winter. The men endure unbelivable hardship all to reach their lines and to have their officers including Augsbergh executed by firing squad because they didn’t stand and fight to the last. A good read, and if you wanted to know about WWII in eastern Europe something to see.