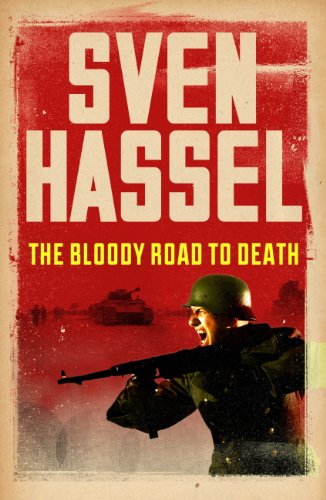 THE BLOODY ROAD TO DEATH depicts all the savagery of war punctuated with black humour, as Tiny, Porta and the rest of the men advance across Europe.

The Russian Officer falls forward and I sink my teeth into his throat. Blood runs down over my face but I don’t notice it. I am fighting for my life.

The 27th Penal Regiment are veterans of the frontline.

But when Hitler’s war takes them through Greece, Yugoslavia and Albania, they are entirely unprepared for what awaits them. And when the water rations run out, they are willing to commit murder just for a drink.

Review Hassel’s books of war are the most powerful I have ever readIn essence this is an expose of the absurdity of war, and a moving plea for peace. As such, it takes its rank with far milder books, such as ALL QUIET ON THE WESTERN FRONT―NEWSDAYThe story shudders from page to page while the devoted friends live precariously from year to year, until only the one survivor is left to write this book. And a gripping book it is―CHICAGO SUNDAY TRIBUNE –This text refers to an alternate kindle_edition edition.

⭐ Seven Hassel is one of my favorite author. Like I wrote reading this was like watching a movie.

⭐ Possibly the worst of Svens books I’ve read, that’s about my 8th. Not a patch on classics like Monte Cassino, Liquidate Paris or Blitzfreeze. It’s more about Porta with his wheeling and dealing, Tiny and his fighting, and both generally horsing around. Sven himself doesn’t get up to much, besides biting a Russians neck in close combat. The book dragged on, but picked up in the last couple of chapters all the same. The Old Man was at pains trying to be his good honest human being, and is a fish out of water with the regular wild bunch.

⭐ This book was chosen randomly and turned out to be a great choice . It’s well written and the characters are entertaining . It keeps you wondering what the will do or say next . I recommend that any war buff buy the series . I did .

⭐ Same old sven. Sometimes his books just seem to drag on. Mostly becous of the drinking scenes go on forever.

⭐ Sven’s work has entertained me for 40 years

⭐ Brutal reallity of war if true. Some train of thought suggest it is purely fiction, either way a good read.

⭐ I first read Hassel’s books when I was a schoolboy in the early 1970s. It was very absorbing stuff for youngsters who had been raised on stories about good, clean heroes winning the Battle of Britain and El Alamein. Its realistic portrayal of war from the perspective of those supposedly soulless Nazi monsters helped develop a healthy scepticism about heroic depictions of the Allies. However, in time the books become a bit repetitive and nihilistic. I am sure that most German soldiers were not as cynical as Hassel’s group. In the end most of them fought with despairing heroism to defend their country and families rather than out of National Socialist idealism. The series of books are entertaining in some ways but they can be a bit depressing with all the slaughter and mayhem after a while. I suppose they still appeal as they have been republished after a number of years out of print.

⭐ I first read Svens books as a teenager many years ago. Back then I thought they were ok – sufficiently so that three decades later thought I would reaquaint myself with some of the works from the series. Basically out of wanting to find a decent WWI or WWII novel from the losing sides perspective. But All Quiet on the Western Front this isnt.The purile humor, cardboard characters, predictable and despairingly shallow plot, and almost British twang that seems to flow from the narrative – remembering these are supposedly German soldiers or people aligned to the Third Reich – make for cringe worthy reading.Truly if your reading taste demands depth in plot, character development (allowing licence for the fact its one of a series), narrative, historical setting etc then you will find this a bit like the literary equivalent of eating rice by itself.

⭐ I began reading Hassels books at the age of ten. They fascinated me. He dealt with a subject (WW2)I have always found very fascinating. His style of writing is great, he describes the horror and dirtiness of war very well, he’s uncontrollably funny at times or rather; his characters are. It was therefore quite a shock to find out that this man had never been in actual combat with any german penal unit,on the contrary. S. Hassel is believed to have been a “stikker” or “stabber” during the war years in Copenhagen. “Stabber” is what the Danes called the betrayers, those who worked with the nazis. Some journalists in Denmark have done a thorough research on Hassels past and it is clear that Hassell is without doubt lying about his years in a German penal unit. There is a photograph of Hassell that shows him in uniform, adorned with medals. Specialists, among them old German soldiers, have looked at this photo and all agree that it is staged. No soldier in a penal unit, no matter how bravely he fought, would ever get a medal. The uniform is also wrong and there is evidence that Hassell was reprimanded by the German authorities in Denmark for disgracing a German uniform. But…the thing remains that I thoroughly enjoyed Hassells stories. Of his writing skills there is no doubt. If only he’d focused on that instead of creating a false past, including betraying his fellow countrymen. I later moved from reading Hassell, to Remarque and Stachow to name a few. Those books tell the stories of the men that really were there.